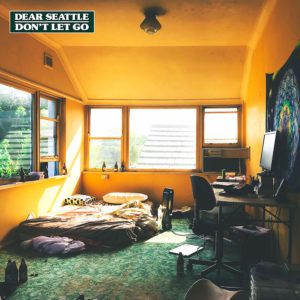 Sydney’s Dear Seattle are the latest Aussie’s to deliver beer-soaked melodic punk. This debut full-length comes off the back of two infectious singles in ‘Daytime TV’ and ‘Maybe’. Along with ‘Try’, they handed the quartet plenty of momentum in the hope of delivering a stellar debut album.

For those familiar with bands such as The Smith Street Band and Violent Soho will feel right at home with Dear Seattle; catchy and sentimental yet unequivocally Australian. And while its arrival comes with plenty of potential, it isn’t quite fulfilled.

Their cause isn’t helped by the aforementioned pairing of ‘Maybe’ and ‘Daytime TV’ being frontloaded early on, setting the bar high. Both are instantly memorable, solidifying fun gang vocals that appear throughout ‘Don’t Let Go’. The latter is especially brash and upbeat with “Da Da Da Da” chants.

Although the remainder isn’t completely forgettable; ‘Bigger Than My Brain’ is carried with a boisterous drive and feedback-drenched riffage. While ‘Homegrown’ is equally melancholy and brash with a hopeless, youthful spirit serving as its lyrical spine yet Brae Fisher isn’t afraid to be candid; “All I need is some degree of honest self-esteem.”

For the most part, Dear Seattle reliably provide memorable hooks. For example, ‘You’ is a plucky, sentimental slice with an innocent but favourable chorus. Nevertheless, as a body of work, ‘Don’t Let Go’ suffers. Midway points such as ‘Let Me Bleed’ and ‘Broke and Hungry’ play to the band’s strengths yet are forgettable amongst what precedes it.

‘A Modest Mind’ is a late highlight as its explosive energy stirs up images of Foo Fighters at their peak, injected with some Aussie rawness. ‘I Keep Dreaming’ is a fitting finale with its steady build, light guitar work and lyrical theme of acceptance. Meaning there’s more killer than filler on here.

Even though it’s not the breakout debut we had hoped for, ‘Don’t Let Go’ is a solid first outing from one of many outfits from Down Under.

‘Don’t Let Go’ by Dear Seattle is out now on Domestic La La.