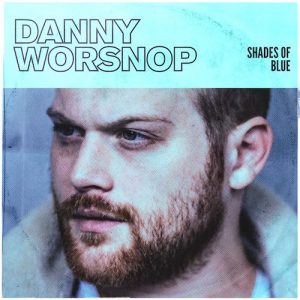 A one trick pony Danny Worsnop definitely is not. With his newest release ‘Shades Of Blue’, Danny shows his bluesy side, complete with gritty vocals, lyrics of heartbreak, and sing along belters. ‘Shades Of Blue’ covers a range of bases, from funky anthems, acoustic ballads, and a sprinkling of country.

‘Little Did I Know’ and ‘Best Bad Habit’ are modern bluesy classics, and terribly catchy. Both tracks combine choir-esque backing vocals, melodic guitar licks with a modern twist. The sultry ‘Best Bad Habit’ is an instant hit, with a horn section that is reminiscent of other blues inspired modern artists such as Joe Bonamassa. Danny also uses horns on ‘Keep On Lovin’, which is a funky track, with brass and keys stabs, along with percussive guitar breaks.

There are some country influences scattered amongst the tracks too. ‘Tell Her I Said Hey’ features beautiful slide guitar amongst other chill instrumentation, very much like a classic country ballad. Elsewhere, Worsnop is joined by a female singer for the smoky bar ballad ‘Edge Of Goodbye’. It’s a succulent offering, reminiscent of classic country duets.

Throughout Worsnop beds in some lovely acoustic ballads. ‘Tomorrow’, a heartbreak hit, shows the sensitive side of Danny’s songwriting; “She deserves to find her happiness, And I only know one way to give her that”. ‘At The Time’, a coming of age tale, is a beautiful track that has heartfelt lyrics that sees Worsnop recall his younger days. ‘I’ve Been Down’ is a raw track that features just a mournful acoustic guitar and Danny’s vocals, in a beautifully vulnerable way. Having these acoustic ballads simply adds to ‘Shades Of Blue’s diversity.

The blend of country and blues might not be for everyone, yet there’s an admirable quality to what Worsnop offer. And if not, you’re sure to enjoy the classic Southern rock soaked stomper that is ‘Ain’t Feeling Sorry’.

By embracing a real array of influences, Danny Worsnop has been allowed to show his versatility, both as a vocalist and a songwriter. When combined together, it makes ‘Shades Of Blue’ a cohesive body of work.

‘Shades Of Blue’ by Danny Worsnop is out now on Sumerian Records.