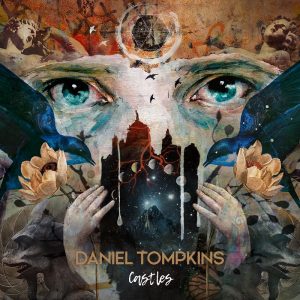 There’s plenty to be excited about with this album, whichever way you view it. Daniel Tompkins’ work with TesseracT has seen him revered as one of the best vocalists out there in progressive metal circles, and given the four year period that this album has spent in limbo, to see it finally released at all is something of a minor miracle. That’s coupled with a number of collaborations from some of prog metal’s other titans to flesh things out, in a way that shows Tompkins’ clear ambitions to position this as more than a mere side-project.

That all seems like a very on-brand aim for an artist in the tech-metal sphere, but for as much as ‘Castles’ tries to really push the boat out and capture that huge, adventurous sound on its own terms, it doesn’t really pan out. For one, Tompkins playing to brooding, poppier soundscapes doesn’t really do a lot beyond show the flexibility of his vocals. As impressive as that is though, the sleek, minimalist beats can often run together, only really solidifying on a track like ’Black The Sun’ where its ambitions pay off in more clearly-defined guitar work.

To Tompkins’ credit, it’s all immaculately produced and buffed to the futuristic sheen that many would expect from him, but it seems to prioritise that over the actual music within. This is an album that wants to rest on its forged sense of wistfulness and melancholy yet that stifles the development of clearer progressions, making the closing moments feeling like a chore. Even the reworks tacked onto the end rarely offer more than slight electronic upgrades and are just as forgettable.

It reaches a point where ’Castles’ just ends up feeling profoundly toothless, blessed with typically excellent composition but lacking anything to really drive it forward. Some mightn’t have as much of an issue with that, but in reality, it leaves this as little more than an album that dissipates on impact.

‘Castles’ by Daniel Tompkins is released on 31st May on KSCOPE.