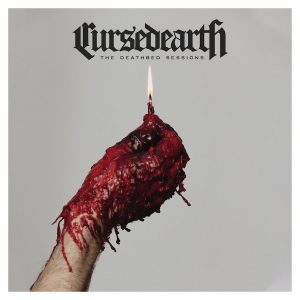 Last year Cursed Earth were forced to sever ties with Jazmine Luders in unfortunate and difficult circumstances. Change was inevitable. Yet, with the vocalist’s spot still vacant, the band regrouped and recorded new music. The result is ‘The Deathbed Sessions’, an EP of punishing metal with a twist. With some of the genre’s big-hitters stepping up to the microphone, it makes for a brutal metal mixtape.

You can’t escape the project’s genesis and hearing seven different perspectives is part of its draw. However, the music is built around the vicious dynamic of the band’s previous release ‘Cycles Of Eternal Grief’. The sound serves them well, providing a rich and potent canvas for their guests to work with. Importantly, the music feels tailored to the vocalist, which enhances the whole experience.

While you could spend hours discussing the relative merits of each vocalist, all you need to know is they all bring their A game. Matt Honeycutt of Kublai Kahn uses a full-force vocal battery on ‘Fear’ but elsewhere you’re treated to excellent use of screams, death growls and even a little clean singing. Lyrically each is also unique. So much so, you’ll spot Venom Prison’s Larissa Stupar from the song title alone.

The band are not content to push themselves and push their guests too. The dark, moody ‘Deathbed’ takes Make Them Suffer’s Booka Nile and Sean Harmanis into new territory. It really suits their mix of styles and the results are haunting and intense. ‘Obsession’ achieves a similar effect by experimenting further, adding a disturbing industrial flavour to pummel your ears. In fact, intensity is something of a buzzword so although ‘Burn’ trades on fairly uninspired blastbeats, you could still use it to scour the floors of hell.

Always punishing and frequently brilliant, ‘The Deathbed Sessions’ shows off Cursed Earth‘s ability to write a variety of brutal, atmospheric pieces. Eventually, a new vocalist may join and whoever it is, this ‘mixtape’ proves the band can support their style.

‘The Deathbed Sessions’ by Cursed Earth is released on 31st May on UNFD.