Review: Currents – I Let The Devil In EP 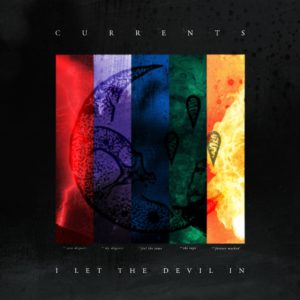 As their unabashedly generic naming convention of ‘plural noun’ would suggest, there’s a niggling suspicion that Currents aren’t all that fussed with growing their audience or finding favour outside of their established fanbase. It’s not that ’I Let The Devil In’ provides much of a counter-argument either; a metalcore EP released in mid-December is rarely going to pick up much steam, but comprising of five new tracks, bolstered by instrumental renditions for each, seems tailored towards existing fans and no one else.

And really, it’s not as though the music itself does much to unravel that argument either; this is functional, fine metalcore that can provide some mild thrills, but wouldn’t hesitate to lose itself amid the torrents of this exact same thing. And the unfortunate thing is, when Currents seem to be under the impression they’re doing something to stand out, it couldn’t be further from the truth. Sure, the progressive touches on ’My Disguise’ are fine, as is the increased melodic focus on ’To Feel Empty’ and ’The Rope’, but when they’ve been the two go-to directions in metalcore for years now, it can feel increasingly threadbare here.

Other than that, there’s really not much else to say about this EP. From a purely metalcore-focused standpoint, it’s executed well enough with a solid guitar tone and Brian Will being a fairly decent screamer, but it would be so much better if Currents could do something meaningful with all that. It feels more and more faceless with every passing listen, playing on tropes that lack definition or unique personality in almost every way.

And ultimately, that’ll be where Currents’ downfall lies. They’ve got the basics down, that much is unquestionable, but their attempts at branching out and exploring don’t amount to anything more than what’s already been done in metalcore dozens of times in the past at minimum, it’s hard to really endorse. Fans and metalcore diehards will probably enjoy it, but that’s about it.

‘I Let The Devil In’ by Currents is released on 14th December on Sharptone Records.