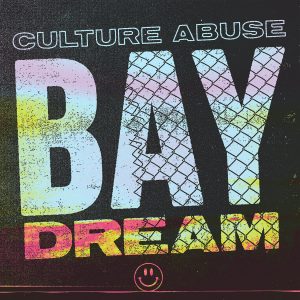 With songwriter and vocalist David Kelling relocating to Los Angeles from San Francisco, it’s no surprise Culture Abuse‘s second full-length, ‘Bay Dream’, has a sunswept demeanour. Whereas 2016’s debut effort, ‘Peach’ honed in on departed friends, drug problems and Kelling’s cerebral palsy, this time he focuses on moving away and fighting through difficult times.

Over the course of 33 minutes, Culture Abuse take a stylistic change from the jagged punk sound found on ‘Peach,’ opting for a breezy, garage-punk direction that has mixed results. For example, the title track starts the album on a bright note with radiant guitars, upbeat tempo and a heartfelt vocal delivery. Likewise ‘Bee Kind to the Bugs’ is a carefree, Californicated highlight with fuzzy guitars and playful melodies from Kelling.

Elsewhere, songs such as ‘Dip’, ‘S’Why’, and ‘California Speedball’ nicely fit the beach rock mould; weightless and cohesive. Yet, it is this trait that proves to be ‘Bay Dream”s downfall. Although ‘Dave’s Not Here (I Got The Stuff Man)’ and ‘Dozy’ try to stiffen the band’s sound, ‘Bay Dream’ has a tendency to become repetitive. The use of shimmering guitars, electronic keys and an overall cleaner production means Culture Abuse lack the musical pull to keep you wanting to come back.

Regardless of the mixed musical output, Kelling’s lyrics come off with renewed optimism and, as heard on ‘Bee Kind to the Bugs’, a hint of youthfulness. While his recent experiences have made him wiser, even though he’s had little time to reflect. “It’s been a long year and I’ve been trying to take it easy, it never slows down, it just keeps going,” he sings on ‘Dip’.

Kelling and Culture Abuse‘s tale of chasing the ‘Bay Dream’ is admirable enough but ultimately doesn’t produce enough staying power. Sure, a handful of tracks will find their way on to many ‘summer rock’ playlists but once the autumn evenings come, this dream will be a distant memory.

‘Bay Dream’ by Culture Abuse is released on 15th June on Epitaph Records.