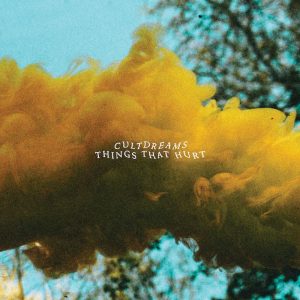 In the two years since releasing their debut album, ‘Seafoam,’ Cultdreams have gone through a transition. Besides drummer Conor Dawson moving to Belgium, they’ve adopted a new moniker after abandoning the name Kamikaze Girls. Nevertheless, this new chapter for Dawson and guitarist/vocalist Lucinda Livingstone is executed with assuredness. On ‘Things That Hurt,’ the pair subtly evolve from their riot-grrl and punk roots, embracing a whirlwind of reverb guitars and a more considered delivery.

Stylistic, their shift towards shoegaze territory pays off. On opening track, ‘Born An Underdog,’ atmospheric guitars complement Livingstone’s words, gradually giving way to a cinematic crescendo. Whereas an ominous, melancholy tone ideally fits the thought-provoking words of ‘Statement’. “I swear if one more man from one more band touches me or one of my friends I’m done,” sings Lucinda.

Although Livingstone more often than not takes centre stage, Dawson is far from a background player. On lively cuts such as ‘Not My Generation’ and ‘Flowers on the Grave,’ his drum fills and hits serve as the emphasis to Lucinda’s angst. While on ‘We Never Rest,’ they combine both reverb-laden guitars with emotional anguish as TWIABP’s Katie Dvorak and David F. Bellow offer one of the album’s standout hooks with its playful melody.

While ‘Things That Hurt’ is lyrically concise and transparent, songs such as ‘Toxins’ and ‘Don’t Let Them Tell You Otherwise’ have a tendency to dwell into an unwanted lull. Nonetheless, ‘Things That Hurt’ has allowed the pair to transition into lyrically deeper and stylistic wider territory with conviction, allowing you to continuously absorb these songs. Whether you consider it a restart for Livingstone and Dawson is open to discussion.

‘Things That Hurt’ by Cultdreams is out now on Big Scary Monsters.