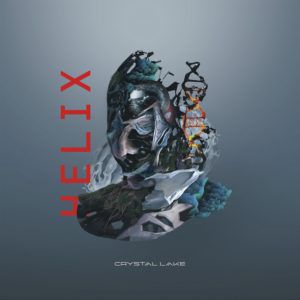 Despite forming in 2002, Japanese metalcore band Crystal Lake have just arrived on western shores, keen to make an impact. With the genre in flux and the big-hitters trying new things, their timing could not be better. Working from the standard metalcore template new album ‘Helix’ has the potential to succeed, throwing a whole host of electronics and wild vocal ideas into the mix. Listening to it is like reaching blindly into a party bag, surprising but ultimately, disappointing.

After a brief robotic introduction, ‘Aeon’ kicks things off with the force of a bullet train. Double bass pedal attacks like a machine gun in a brutal ride, until suddenly the song is derailed by electronic glitching that doesn’t feel fully integrated.  It’s an awkward trick they repeat throughout the album; disguising uninspired metalcore with a smattering of effects.

When they get it right on ‘Agony’ you’re presented with a snarling beast of a song that segues into an electronic outro. At other times, notably ‘Hail To The Fire’,  it falls flat, with only an interesting vocal tic saving it from being a total write off.

Vocalist Ryo Kinoshita is the album’s saviour. While the band’s only original members, Yudai Miyamoto and Shinya Hori, seem content sticking to their metalcore roots, Kinoshita really pushes himself, providing the both the album’s highlights and its most experimental moments. Ranging from singing to yelling, grunting and even showing off decent rap skills on the nu-metal leaning ‘+81’.  Yet, even he is hit and miss. The lacklustre mainstream metal balladry of ‘Devilcry’ is followed by a bizarre song made up of strange vibrating phone noises, glitches and synths with layered vocals, sounding like a song Mike Patton would put out. One minute too safe, the other too unrestrained.

While Crystal Lake are willing to experiment, by refusing to fully commit to a new sound they hold the album back, making it hard to recommend. Track 10 is called ‘Just Confusing’, it wouldn’t have been a bad title for the album.

‘Helix’ by Crystal Lake is released on 15th February on SharpTone Records.