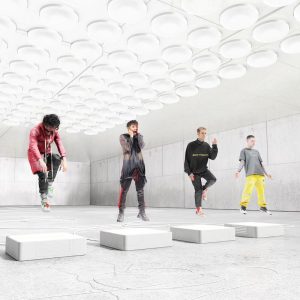 Change was inevitable. Crown The Empire have never stood still. Slowly transitioning away from the metalcore base, each record has been forward-thinking, taking a different approach. ‘Sudden Sky’ continues this trend but with a new-found confidence.

Recent singles ‘20-20’ and ‘What I Am’ were bass led, exciting and grounded. Skewed toward an alt-rock sound, they were a comfortable progression from 2016’s ‘Retrograde’. However, these songs give a false impression of the rest of the record. Synths reign and the metal elements haven’t gone away. Instead, songs such as ‘SEQU3NCE’ and ‘Red Pills’ mix them with a frenzy of other parts. It’s a glitzy Frankenstein’s monster style, but it works surprisingly well.

The band has never shied from working with outside producers and writers. You can tell, everything here is focused and functions correctly, no matter what they’re attempting. Songs such as the slow-burning ‘Blurry’ are simple and hit hard, but others are so hyperactive, they are the metal equivalent of a sugar-fuelled children’s party. However, these guiding hands also create the clinical, manufactured feel of a pop-record.  Despite this, and unlike similar bands, they manage to retain their personality. This is mainly due to vocalist Andrew Velasquez. Keeping his voice relatively “real,” pins the songs together. Especially on the straightforward ‘Under The Skin,’ where he really shines.

However, like the band’s entire discography, it can be a frustrating listen. Production tricks are ladled on so thickly, it often becomes distracting. Nothing feels pure and there are so many backwards bits, snyths and sharp turns it can be dizzying. Especially ‘MZRY’ which is almost dubstep in its execution, lurching around from part to part it’s like a toddler having a meltdown in an ice cream parlour.

‘Sudden Sky’ might just be Crown The Empire’s best record.  It may have a cut and paste feel, but a strong sense of identity helps keep it grounded. It’s a synthetic and ambitious but surprisingly heartfelt album.

‘Sudden Sky’ by Crown The Empire is released on 19th July on Rise Records.