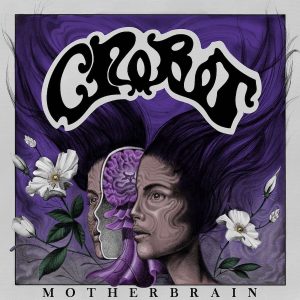 If anything can be said about Crobot, it’s that they’ve always had a bit more to them than a lot of retro-rock bands. They still mightn’t deviate from the clear-cut grooves and blues-rock influences, but they’ve at least beefed them up a bit more for a result that’s marginally more thrilling. And really, it says a lot about this scene that Crobot have stayed in the mid-tier at best because of it, slogging away while arguably less-deserving acts get more recognition.

That’s not to oversell this band by any means, but they’re definitely capable of delivering shots of stoner-rock that are certainly more enjoyable than their contemporaries. Just take ’Motherbrain’, an album which is fairly tried-and-true in its approach, but remains robust enough to get some good enjoyment out of. Part of that is the primal thrill of a fat ol’ groove peeled out with absolutely zero subtlety, but with touches of winding grunge and psychedelia on ’Drown’ or Brandon Yeagley’s low-slung sneer on ’Alpha Dawg’, it shows that Crobot have a bit more than just the basics at their disposal.

It’s not like the core is much different from a lot of other blues- or stoner-rock though, and particularly towards the end with the more straightforward hard rock of ’After Life’, it feels like Crobot begin to wear their influences out. Still, they remain solid most of the time with the sleazy guitar tone and deliberately creeping, hazy pace, and they do hit that sweet spot of real power more often than not.

It’s a sense of consistency, and just an overall higher bar, set Crobot apart from most of the pack. They’re arguably more of the same, but there’s an attitude that feels delivered on here in a way that most others just aren’t able to. It won’t make ’Motherbrain’ enough to convert any outsiders, but within this scene, this is probably the option to go for.

‘Motherbrain’ by Crobot is released on 23rd August on Mascot Records.