Review: Commonwealth – Everyone Around Me 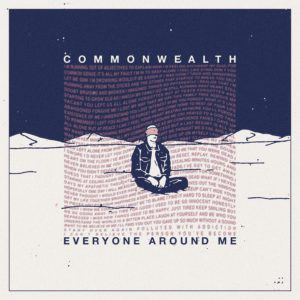 Imagine a cold, lonely, winter’s evening. The only warmth from a crackling fire. In a dark place, Commonwealth’s music could be that flicker of hope.  When they describe their debut album ‘Everyone Around Me’ as “honest music for the worn out soul”, they hit the mark. An air of melancholy haunts each of the eleven tracks and yet, this isn’t a despairing record, which is where its real strength lies.

Formed in 2016, the Orange County band’s first single ‘Father(s)’ caught the public’s attention and it’s not hard to see why. A painfully honest, emotionally stirring song, it has a power bordering on the uncomfortable, making for a striking listen. Re-recorded here, it has lost some of the original’s rawness, but none of its potency.  However, it’s the only one of these songs where Tyler St. Clair plunges quite so deep, and that’s no bad thing.  While he isn’t afraid to wear his heart on his sleeve, he doesn’t need to break apart is soul every time. Doing that would create a dark, miserable album, and this blatantly isn’t the case.

‘Runaway’ bristles with optimism and you can’t miss the brighter composition of ‘Happy’. An almost ironic title because, as always, St. Clair’s lyrics err toward the maudlin, but its presentation is uplifting. Songs like ‘Lost’ and ‘Vinyl’ toe the line between confessional and powerful, proving the band’s songwriting talent wasn’t a one-off. In fact, every song is of a high standard.

Despite the band’s atmospheric approach and their frontman’s introspective nature, there is a sense of grandeur here, most prominently on opener ‘Fear’, but continuing throughout. The record feels big, as though Commonwealth have their eyes on larger sized venues, where these songs would fit comfortably. Chances are this record’s thought-provoking, accessible sound could propel them there. It’s certainly one you’ll be wondering about once its runtime plays out. Perhaps because even closing song ‘Unbalanced’ with its refrain of “It’s all my fault” is laced with hope.

‘Everyone Around Me‘ by Commonwealth will be released on 18th January on Sharptone Records.