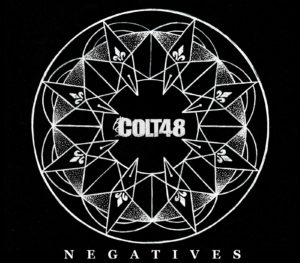 As tempting as it can be to blindly follow trends in music nowadays, there’s a certain degree of bravery to Colt48 so openly proclaiming one of their influences to be 2000s nu-metal. It’s bound to get some funny looks, but to their credit, it seems to have worked for the duo up to now; they’ve managed to nab some considerable support slots as well as a neat amount of hype for this new EP.

That said, it doesn’t take long for that good will to circle back into scepticism again, as ’Negatives’ pretty much confirms all expectations of this being an unfortunately dated and lumpen listen. Credit where it’s due though – for a duo, Colt48 can at least conjure up a much thicker, chunkier sound than expected, and even break into a solid groove when necessary like on ’Scapegoat’. On the whole, it’s more of a serviceable take on a questionable style than anything else; it has its own problems in abundance, but compared to the unceasingly dull angst-rock of a band like Three Days Grace, this is definitely preferable.

Those issues definitely remain though, and for all of the melodic instincts that Colt 48 display, the sludgy, turgid guitar tone combined with overweight nu-metal production and Adam Jerome’s solid but ultimately anonymous vocals lead to a band that simply fall into the background. If this had come around a decade-and-a-half ago, it might’ve been passable, but rock has evolved past the point of post-grunge ubiquity, and it’s hard to see where something like this can fit in among that.

That’s not to say that Colt48 can’t fit in – again, they’ve got more potential than even some of the most established acts in their scene – but ’Negatives’ feels like an EP spinning its wheels without a definitive game plan. On the whole, it’s more rock-by-numbers than anything, and it’s hard to see how that can fly in 2019.

‘Negatives’ EP by Colt48 is released on 29th March.