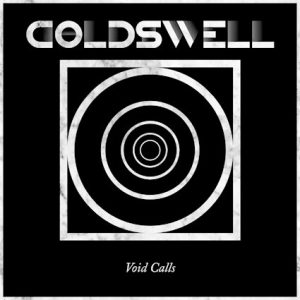 Consisting of brothers Evan and Brandon Krise alongside Ian Hudson, Cleveland alt-rockers Coldswell formed over the desire to experiment with and replicate the sounds of pioneering shoegaze bands. They also take inspiration from and reflect the mood of names such as The Cure in their lyrics. Since forming in 2015, they have two EPs under their belt and are now taking the next step with their debut full-length ‘Void Calls’ which offers grunge infusions, instrumental prowess, and captivating vocal work.

The record kicks off with ‘L’appel du Vide’, which immediately immerses you in a familiar dreamy shoegaze soundscape. Evan Krise’s drifting vocals are notably raw but gentle, exuding a sense of honesty. Next, the memorable ‘Dark Eyes‘ cuts in, carried by its catchy chord progression which creates a more upbeat, crowd-pleasing track. Early on, this showcases Coldswell‘s ability to mix things up musically and keep listeners on their toes.

Akin to those of Robert Smith, Evan Krise’s sombre vocals in ‘Fairweather’ pair perfectly with the nostalgic and classic-sounding synth, solidifying this as a standout track. ‘Fall Apart’ makes for another memorable entry, with an introduction comprised of a deep bassline and gently plucked guitar, with forlorn, pensive lyrics finally exploding into a more grungey finish and crunchy guitar seeing the track out. ‘Good Enough’ sports similar energy to ‘Dark Eyes’, with bright guitars, lively drum work and catchy gang vocal sections which are bound to rile up a crowd live. Finally, the fragile piano notes of closing track ‘Giving Up’  alongside its heart-wrenching lyrics make a lasting impression on the album as a whole.

‘Void Calls’ is a real treat for shoegaze and grunge fans alike, and while parts can occasionally sound a bit filler, the standouts more than makeup for this. Despite the clear influences heard throughout, Coldswell have been able to create a very much fresh and memorable record which will no doubt propel them further as a band.

‘Void Calls’ by Coldswell is released on 21st June.