Review: Coheed and Cambria – Vaxis – Act I: The Unheavenly Creatures 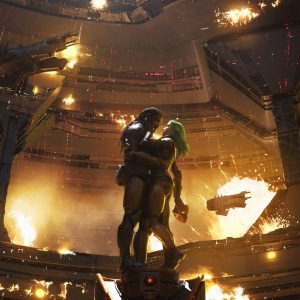 After having gone down the straightforward alt-rock route on 2015’s ‘The Color Before the Sun’, Coheed and Cambria have returned with the next chapter of ‘The Amory Wars’, the sprawling sci-fi concept that has defined their career so far. Album number eight, ‘The Unheavenly Creatures’, is the first of a five-story arc called ‘Vaxis’, taking place in the elaborate ‘The Amory Wars’ universe. For new listeners, it’s a daunting prospect but for anyone familiar with C&C‘s brand of prog-rock will feel right at home on ‘Unheavenly Creatures’.

The story is based around Nostrand and Nia, two lovers turned bank robbers who seemingly have been separated for years. However, in reality, Nia is now a reluctant execution called ‘The Glass Widow’ at the prison (called ‘The Dark Sentencer’) where Nostrand (aka ‘Creature’) is being held at. While our villain comes in the form of Colossus, and as for Vaxis, well that’s Nostrand and Nia eventual son.

Undoubtedly it’s cinematic, both in sound and in length. At close to 80 minutes long, this is a record that tests your patience yet it does reward you throughout. ‘The Dark Sentencer’ is a fiery, fist-pumping opener with big riffs supporting Claudio Sanchez’s distinctive vocals. The titular track interestingly uses chiptune synths before an explosive chorus. Whereas songs such as ‘Toys’, ‘Queen Of The Dark’ and ‘Night-Time Walkers’ firmly embrace epic rock tendencies. ‘Old Flames’ is a late highlight that captures the celebratory happy ending of the story as Nostrand and Nia reunite, with its resonating group vocals and playful “na na na”‘s.

Sanchez and company clearly know how to play to their strengths, as writing monumental, soaring rock songs comes off like second nature to the quartet. Yet it’s also their downfall. The trait of lengthy, crushing rock has a tendency to mould into one, and that’s before you hone in on the demanding narrative.

Much like their previous conceptual outings, ‘The Unheavenly Creatures’ is another impressive outing for Coheed and Cambria. It might not welcome new listeners with open arms, but for those who have been entrenched by ‘The Armory Wars’ so far, will embrace this.

‘The Unheavenly Creatures’ by Coheed and Cambria is released on 5th October on Roadrunner Records.