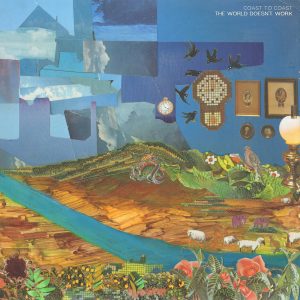 Birmingham’s Coast To Coast are one of those bands who’re heavily involved in the UK pop-punk scene and, as such, many will most likely have heard of, if only by name. That’s a real credit to the band’s slow and steady rise within the community, with two well-regarded EPs under their belt in a couple of years – and now, on their third EP, ‘The World Doesn’t Work’, they’re ready to step up and announce.

While their sound will be no doubt be credited as somewhat pop-punk for the sake of easily labelling, it pushes those boundaries greatly. This outing sees them branching out into more gloom-coated, emo-esque territory. The use of well-crafted, choppy melodies, varied guitar sounds, alongside sombre, real-life lyrical content is reminiscent of Boston Manor or Trash Boat circa 2016.

‘The Sun Is Dim’ is particularly reflective of this somewhat dark-tinted spin, with a slow, booming beat guiding the slippy, descending guitars beneath Keiran Hyland’s thick, Brummy accent. His vocals seem to get better and better with each release, and here fell especially dominant, finding the balance between his harsher, limit-testing bursts and lower, covering parts like on ‘Be Kind’.

There’s an indie tint to tracks ‘Tremble’ and ‘Boxing’, adding an extra dimension of complexity to their sound that we haven’t heard before. Guitar melodies seem to play on light, bouncy riffs in these moments, contrasting to the dimmer lyrics, depicting a warped, negative side of the world and the struggles of escaping a depressive rut.

The band’s third EP serves as a marker in their career, calling from the rooftops to announce their arrival as big up-and-comers in the alternative scene. ‘The World Doesn’t Work’ might not fix the world, but it’s certainly a welcome addition into it, and one that should put Coast To Coast on a much faster upward trajectory.

‘The World Doesn’t Work’ EP by Coast To Coast is released on 26th October on Fox Records.