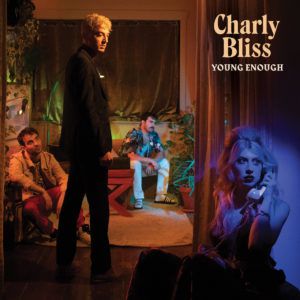 It isn’t easy putting a label on your sound. Not when you do something different. Charly Bliss call their music ‘bubble-grunge’ and no one is going to disagree. It’s a mix of grubby indie guitar rock and Cyndi Lauper-esque vocals.  Both rough-edged and sweet, their songs are a tug-of-war between the two. New album ‘Young Enough’ sees the band pull toward the sweeter side. It’s a poppier sound with a wicked streak.

Unwilling to make a carbon copy of their debut album ‘Guppy’, this time the band puts more emphasis on the unusual. You might still hear The Strokes in their guitar stylings on songs such as ‘Under You’ but, for the most part, the album is built around twinkly keyboard sounds.

Joe Chiccarelli handles production and helps them slip comfortably into this new skin, keeping everything well-rounded while enhancing the band’s strengths. For example, ‘Blown to Bits’ sounds like someone is leaning on an organ, but underneath it subtly becomes a powerful pop song. You hardly notice as vocal hooks bleed in. It’s both clever and catchy.

How much you enjoy Charly Bliss pivots on your tolerance for the quirky. Eva Hendricks sings in a high, girly voice. No matter if she’s giving a strong political/social message or crooning on the charming ‘Camera’, it really stands out. For the most part, it’s very effective but can grate if you’re not completely on board. Nowhere more so than ‘Bleach’ where it mixes with the bright 1980’s organ and the effect is like eating too much birthday cake. With its slightly gated snappy drum sound, ‘Chatroom’ shares the synth-pop vibe and comes across like a line-dancing classic. Thankfully with Dan Shure’s big scuzzy bass reigning in the saccharine overtones, most of the album avoids being so sickly sweet.

‘Young Enough’ is a hit for the band. They confidently integrate new elements, retain their clever lyricism and push their songwriting, but it might be too sugary for some.

‘Young Enough’ by Charly Bliss is released on 10th May on Lucky Number.