Review: Catch Fire – Karma Owes Me A Lifetime Of Happiness 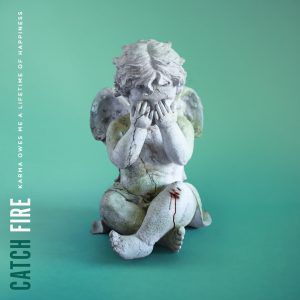 After two excellent EPs, Nottingham quartet, Catch Fire, have finally delivered their debut full-length platter, which shows further development of their sophisticated brand of pop-punk as they continue to push deeper into their own territory. It is a loosely conceptual record musing on a perceived lack of karma in the world as they wax lyrical on feelings of being undeserving, the ever-pervading spectre of depression and the perception that so many bad things happen to good people. With excellently delivered songs, boasting intelligent lyrics and a fine sense of melody, it is a mighty fine effort.

The album opens in style with ‘Petrifaction’; a reflective slice of pop-punk for the serious that rumbles with a heavy vibe, but delivers a killer hook in the chorus and totes a glorious sweeping guitar sound. It’s followed by the equally classy ‘Malignance’, which is kinda like blink-182 at their absolute darkest with a heartfelt air of sadness.

All the usual elements of the genre are there in terms of vocal style, searing riffs and bright guitar lines, but the heavy subject matter and emotional edge take all these songs to a more sophisticated level. ‘Fault Line’, for instance, has a great poppy hook, despite simultaneously highlighting mental health issues, while ‘Heist’ has a punky bass and great attacking riff to go with an undercurrent of anguish.

Other stand-out moments include the breakneck riffing and spiky punk vibe to the classy ‘Bad Behaviour’ and the stunning finale of ‘Third Person’, the most downbeat and reflective track. It closes the album in style with tender verses, a massive soaring chorus and brilliant arrangement that subtly explores differing textures and rhythms – classy stuff.

Whether it’s a searing punk ballad, an up-tempo rocker or something with a heavy emotional edge, ‘KOMALOH’ showcases a band that obviously think hard about what they are doing and have succeeded in delivering an excellent record.

‘Karma Owes Me A Lifetime Of Happiness’ by Catch Fire is released on 16th November on Rude Records.