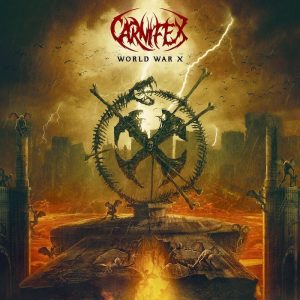 After six albums, Carnifex aren’t slowing down. Neither are they changing, they’ve been vocal about keeping their feet firmly planted in the deathcore camp and ‘World War X’ sees them be true to their word. Despite being consciously more accessible than last year’s ‘Bury Me in Blasphemy’ EP, they haven’t surrendered their signature sound, or their power.

With so much experience, the band know what works. From the start, it’s a blitzkrieg of drums and deathcore riffs. Everything feels driven, works from its own battle plan and contains stand-out moments. Songs such as ‘Eyes Of The Executioner’ strike again and again with the persistence of a swinging axe. Even the straightforward ‘Visions Of The End’ constantly changes tactics, putting emphasis on separate elements, making for a solid and memorable overall sound.

Notably, vocalist Scott Ian Lewis is on top form here. His death growls are solid, but he adds variety, spits rapid daggers and really helps the music flow. The brutal and unrelenting ‘Hail Hellfire’ is an example of this, just as much as the more restrained ‘All Roads Lead to Hell’, which is enhanced by a guest solo from Angel Vivaldi.

The album excels on songs like ‘Brushed By The Wings of a Demon’ when drummer Shawn Cameron eases up on the double-bass pedal. He still sounds like a machine gun on the opening volley of the Somme, but it shifts the dynamic and gives the other instruments space to breathe. On ‘No Light Shall Save Us,‘ a guest spot from Alissa White-Gluz allows the band to spread their wings. The light vocal adds an extra dimension and, more importantly, the band change their approach to accommodate her voice. It isn’t just a throwaway dash of clean singing.

Bold and battle-hardened, Carnifex have created a strong bastion of a record with ‘World War X’. Seven albums in they can still whip up a storming, exciting album without straying far from their core sound.