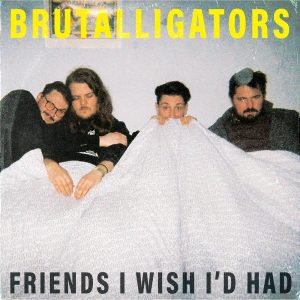 Brutalligators‘ latest EP should make the punk scene sit up and take notice, as the South-East quartet combine indie-rock and post-hardcore to thrilling effect. From ‘Crows’ to ‘D Word’, they expand on their previous material with a collected release that turns contemporary indie-punk on its head.

‘Crows’ gets the EP off to a strong start. It’s not quite post-punk, though there are clear similarities to The Blinders and Fontaines D.C. Full of vigour, the opening verse sets the tone for the rest of ‘Friends I Wish I’d Had’, as Brutalligators turn the soft verse/loud chorus format on its head with an impassioned, if slower, refrain. There’s something Frank Turner-esque about it all, particularly in the vocals, although their sound as a whole lacks the folk-influence of his solo output.

‘Kill Your Heroes’ is a serious statement of classic hardcore intent, slap-bang in the middle of the release. Calling out abusers and musicians exploiting their fame and status, they aren’t holding back. The fury in Luke Murphy-Wearmouth’s words is palpable as he airs the band’s rages.

The versatility of the four-piece makes for an EP that is seldom dull. In these five tracks, there’s a band who are slick, composed and organised. ‘Excited’ follows and is heavier, displaying more of a post-hardcore influence. ‘Free’ is much the same, lacking the intensity of ‘Kill Your Heroes’ but displaying another level of adaptability. On balance, it’s probably the weakest track on the EP – it feels less innovative than the rest.

‘Friends I Wish I’d Had’ culminates with ‘D Word’, which along with ‘Crows’ bookend the EP in superb fashion. Intense yet melodic, Murphy-Wearmouth starts by declaring “Don’t wanna kill myself today/It’s not a thought that really comes into my head”

Indie-punk hasn’t been in short supply for the past couple of years, but with their stronger post-hardcore influences, Brutalligators aren’t just here to make up the numbers. A strong effort from a band who only looks to be improving.

‘Friends I Wish I’d Had’ EP by Brutalligators is out now on Real Ghost Records.