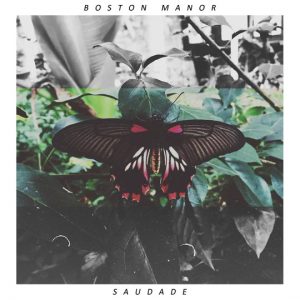 After intriguing the scene with the unprecedented ‘Driftwood’ and riding the buzz of their recent Pure Noise Records signing announcement, Blackpool’s Boston Manor has produced ‘Saudade’ to a fixated audience.

Opener ’Gone’ is noodly, initially shifting towards the galloping blast-beat swing present in Boston Manor’s sound. There is a distinct refreshing Britishness that Boston Manor have pushed to the forefront, juxtaposing the default American twang that has been apparent within pop punk in the last few years.

’Trapped Nerve’ is a glimpse into new terrain which embraces an eerie dark alt rock sound. This heavy alternative leaning is appropriate considering vocalist Henry Cox’s wish of apathy – “Sleep for the rest of my days, and I’ll just wish the world away.”

’Saudade’ blends an energetic melodic punk charm with a distinct muddy alternative rock sound reminiscent of the twang of Basement’s ‘I Wish I Could Stay Here’. Tracks ‘Asleep At The Wheel’ and closer ‘Shade’ are stroked heavily and neatly bleed into each other’s tones.

Boston Manor has crafted an EP that caters to an expected, mature progressive alternative rock sound that, at times, retracts back to a sound that has recently secured themselves a concrete fanbase.