Review: Boston Manor – Be Nothing. 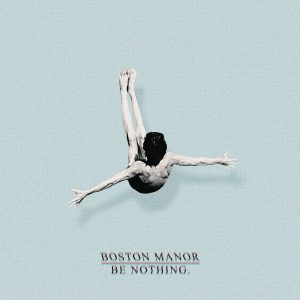 Ever since we first came into contact with Boston Manor and their debut ‘Here/Now’ EP, they have always had the potential to break out of the pop-punk box many have placed them in. Now after a couple of EP releases; ‘Driftwood’ and ‘Saudade’, they’ve delivered a debut album that is well worthy of taking them to the next level.

Picking up where ‘Saudade’ left off, ‘Be Nothing’ is carried with a plausible emotional core yet is equally delivered with purpose. Over the course of ten songs, the North West five-piece produce an impassioned collection that demonstrates their musical and lyrical growth. First single ‘Laikia’ serves as the bridge from ‘Saudade’ with its punchy drum work, neat guitar harmonies and emotive vocal delivery. Elsewhere, opening track ‘Burn You Up’ sees vocalist Henry Cox sing “you better get used to this as I’m going nowhere” whilst his bandmates provide a jangly brand of emo/pop-punk. While ‘Forget-Me-Not’ rushes through with urgency and bounce as Cox offers a bitter message to a former love.

‘Be Nothing’ truly shines when it rides on Cox’s emotions. ‘Lead Feet’ is momentarily held back with a distant opening verse before being vibrantly released. ‘Broke Glass’ swells in Cox’s tender honesty with its hazy guitars and steady tempo putting his vocals front and centre. Ringing guitars hauntingly welcome ‘Cu’ before dropping in and out of full band onslaughts, yet Cox’s lyrical compassion leaves you fully hooked. Structurally it’s one of the standout moments on offer.

‘Be Nothing’ is an addictive and thoroughly engaging record that needs to be listened to from start to finish. The quintet’s collective maturity and openness to take a more structured approach, along with a constantly convincing vocal display, sees Boston Manor defying expectations. It’s an album that should open new doors for them, as it’s one of the strongest debut albums of the year.

‘Be Nothing.’ by Boston Manor is released on September 30th on Pure Noise Records.