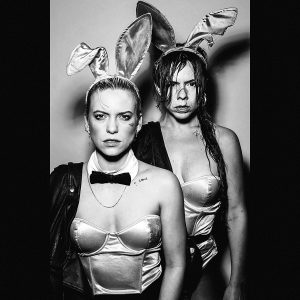 With their self-titled debut album, London duo BONES UK combine riot grrrl with menacing industrial rock and a pinch of pop sensibility for good measure. Early on, comparisons can be made with Miley Cyrus’ recent Nine Inch Nails covers for Netflix’s ‘Black Mirror’. ‘Bones UK’ can be a dark and uncomfortable listen at times, but it comes with the territory; BONES are full-on, forthright, and don’t care what you think.

This isn’t run-of-the-mill riot grrrl. Although there is a clear influence present, shades of Peaches and Goldfrapp can be heard – feminist punk meets electroclash in this gripping merging of genres. “What a waste of a pretty face” declares vocalist Rosie Bones in a mocking fashion over killer drums and synths in ‘Pretty Waste‘, getting the album off to a storming start three songs in.

On occasion, they go for a more mainstream sound. ‘Skeletons’ isn’t a complete divergence from the ‘dark pop’ sound that the likes of Lorde and Halsey have popularised in recent years. Meanwhile, opener ‘Beautiful Is Boring’ is a strong track, with an electro beat that could be straight out of Britney Spears’ late-2000s output.

As talented as they are, the novelty starts to wear off slightly towards the end of the album – the feeling is that 12 tracks is a bit of a stretch, and perhaps ten would have been preferable. ‘Black Blood’ comes in at over four minutes, and its stripped-back, soft-rock feel is completely at odds with the rest of the album. Sandwiched between the far more enthralling ‘Creature’ and ‘Limbs’, it feels like the obligatory ‘slow song’ shoehorned in purely to tick a box.

Having said that, they don’t go out with a whimper. Album closer ‘Girls Can’t Play Guitar’ is one of the best tracks here, heavier with bluesy undertones. If we can take one thing away from BONES, it’s that they definitely can. Seeing where they can go from here looks to be one hell of a ride.

‘Bones UK‘ by BONES UK is out now on Sumerian Records.