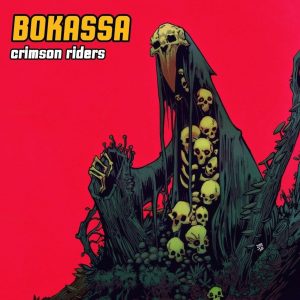 Much of the discourse surrounding Bokassa has only made it evident how little of a consensus there is about them. That’s only been amplified by their current European stadium tour with Metallica, with reactions ranging from them being christened as one of the future stars of heavy music, to a confusing mix of punk and stoner-rock that really struggles to land.

Right now though, it’s easy to see faults with both sides. ’Crimson Riders’ doesn’t quite reach the level of mastery that some are quick to brand Bokassa with, but it definitely feels like a refinement of what previously did feel a bit messier and looser. They’re arguably at their best on a track like ’Vultures’, dropping into mid-paced grooves with a greater focus on the hard rock hook, but the ragged, bug-eyed energy of ’Mouthbreathers Inc.’ and ’Blunt Force Karma’ do actually mesh rather well with the more guttural guitar tone.

Granted, it sometimes feels as though Bokassa are playing up their rawness and ruggedness for aesthetics over function. With a vocal delivery that frequently trips over itself and gets lost in an already dense mix, the criticisms of some messiness aren’t totally unfounded here. That said, this definitely feels like a step in the right direction overall; it’s generally tighter and more focused, and even when new elements are thrown in like the odd saxophone line here and there, it builds upon what’s already there rather than just slapping another layer on top with no subtlety or modulation.

It’s why writing off Bokassa now feels like a rather blinkered way of going about things. They’re clearly still growing as a band, and ’Crimson Riders’ is perhaps among the most solid example of that yet. It’s moving into a clearer direction that feels like more than just parts slotted together, and if Bokassa can keep it up, those “future of heavy music” statements mightn’t be too far off.

‘Crimson Riders’ by Bokassa is out now on MVKA Limited.