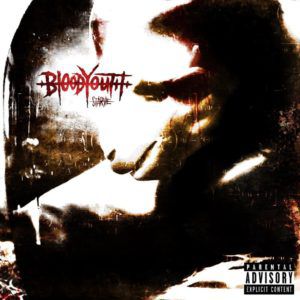 The two years following the release of their debut album, ‘Beyond Repair’, has seen Blood Youth embark on a relentless touring schedule that has seen them share the stage with the likes of Stone Sour, Neck Deep, and While She Sleeps. The exponential growth of the band has led them to ‘STARVE’, a sophomore album that’s as cohesive as it is terrifying.

Based on the album cover alone, it’s clear that Blood Youth have some nu-metal leanings on ‘STARVE’, and the music confirms this, with 13 tracks that put the listener through the ringer.

Opener ‘{51/50}’ is a clear reference to Slipknot’s ‘[515]’ and lures you into a false sense of security with its hip-hop drum beat and atmospheric synth, before beginning the onslaught with the title track. An ominous, lurking bass riff behind panic-stricken chords builds tension before the earth-shaking riffs take over. A similar pattern is employed throughout, with some experimental exceptions like ‘Keep You Alive’ which serve to break up the album, while also showing a less “cookie-cutter” side to Blood Youth.

The musical growth is accompanied by a lyrical maturity that reaches far beyond anything Blood Youth have produced before. Turning away from outward stresses, singer Kaya Tarsus turns his focus inwards, singing of anxiety on tracks like ‘Spineless’, regret and anger on the sub-two-minute ripper ‘Hate’, and depression on ‘Waste Away’.

The band performing on ‘STARVE’ is leaps and bounds ahead we heard on ‘Beyond Repair’. While the debut effort was a solid progression, ‘STARVE’ takes the foundations of that sound and shakes it until it comes toppling down, and the pile of destruction that remains is the sheer brutality we hear now.

‘STARVE’ offers up something for all heavy music fans, from bone-shaking riffs, to heavy melodic choruses, to brutal breakdowns, all without ever getting stale or feeling like a rehash of its predecessor. With an added dash of nostalgia to solidify, ‘STARVE’ will be one of this year’s best heavy albums.

‘STARVE’ by Blood Youth is out 22nd February on Rude Records.