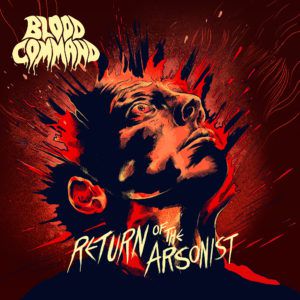 With each release, the reputation of Norwegian “deathpop” specialists, Blood Command, grows and it’s easy to see why. 2017’s ‘Cult Drugs’ full-length was revered by many. Now having impressed throughout Europe at various festivals and touring spots, they’re back with ‘Return Of The Arsonist’.

With six tracks coming in a rapid 14 minutes, it’s an EP that could be taken two ways. For longtime fans, it’s an all too brief return yet for others, it’s a short, sharp introduction to Blood Command‘s musical cocktail of punk, hardcore, pop and metal. Nonetheless, it’s a stellar reminder of the quintet’s pulsating sound.

It’s no surprise that it radiates with urgency as semi-intro track, ‘Don’t Strike A Match, Use The Lighter’, eases in with grandiose synths before bursting with energy through its frenzied punk delivery. Yet if you want to a thorough representation of what Blood Command are about, then look no further than the brilliantly (or awarkedly) titled ‘S01E02.Return.Of.The.Arsonist.720p.HDTV.x264’. With its razor-sharp guitars, catchy tempo and “wo-oh” gang vocals, its an infectious delight.

‘No Thank You, I’m More Into Fake Grindcore’ keeps the momentum going with more massive hooks and punchy drum work. While the ever dynamic Karina Ljone is a firecracker of a vocalist. Just take the closing track, ‘Afraid of Water’, for example. Thriving with energy, Ljone’s impassioned delivery shines amongst the rumbling bass, gritty undertone and an addictive melody.

For all its raucousness, ‘ROTA’ does somewhat falter. ‘Ritual Example’ is a chaotic 1-minute burst that comes off as an interlude. And while the vinyl exclusive cut, ‘Live Right Or Go Straight To Hell’, has plenty of attitude and matches the EP’s best moments in the energy department, it still feels slightly tacked on.

Although it’s brief, you can’t fault the sonic force and irresistible delivery that Blood Command show on ‘Return Of The Arsonist’. Whether you consider it a welcomed return or you’re hearing the Norwegian mob for the first time, you’re sure to come away wanting more.

‘Return Of The Arsonist’ EP by Blood Command is out now on Fysisk Format.