Review: Best of Enemies – A Fear That Comes Around EP 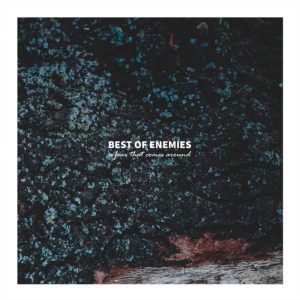 “I’ve been buying records that I can’t afford/I’ve tried learning a language, just ‘cause I’m bored” sings vocalist Sam Christmas on the opening verse of ‘I’m In Hell’. On the first track on their new EP ‘A Fear That Comes Around’, Croydon quartet Best of Enemies are speaking with frank honesty. On this release, the follow up to their 2016 effort ‘Sorry State’, we are presented with four tracks of perfectly palatable pop-rock. No new ground is broken, but in all honesty, it’s something of an improvement on their earlier material.

Following ‘I’m In Hell’ comes ‘Running Rings’. It has a very You Me At Six vibe about it, the sort of offering that is likely to please emo and indie kids alike. Ultimately though, the track as a whole never really gets going. At this point, the EP starts to feel perhaps slightly underwhelming, but thankfully ‘Shake the Feeling’ comes along offering a degree of respite. Less derivative, it has a steady beat and a strong finish, the passion of the band clearly shining through. It’s a slow burner that sees a wave of fury ignite at a thrilling climax; a maelstrom of intensity.

Continuing along the same vein, ‘24’ is a pleasing way to close the EP. All things considered, it’s probably the best track on it – as common as it is for bands to stick a slower song at the end of a record, it works here. It feels more considered than the rest, sounding Frank Turner-esque at times – the second half of the EP shows a definite jump in quality.

Best of Enemies are showing some real signs of promise; it remains to be seen how far they are capable of going, but after ending on such a strong note with ‘Shake the Feeling‘ ‘24’, it wouldn’t be wise to bet against them going further. There’s more to Best of Enemies than one might assume on first listen – it’ll be interesting to see what they can do on a full-length release.

‘A Fear That Comes Around’ by Best of Enemies is released on 24th April on Undead Collective Records.