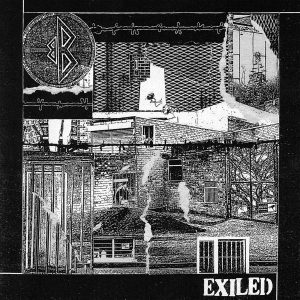 Politically-charged bands have no shortage of material to work with these days. Especially in Britain, as we approach a decade of Tory rule in the midst of Brexit shambles, there are a plethora of bands capitalising on a dire situation through music.

‘Exiled’ is exactly what a “political” album should be. Taking influence from noise-rock, anarcho-punk, and a plethora of other equally raucous corners of the musical world, Bad Breeding’s third record is a pure, violent burst of sonic rage. There’s no pretence, no wordy extended metaphor, no beating around the bush – just twelve tracks of righteous fury, each one directed with laser-beam focus at a different social issue. The band are most concerned with their working-class roots and the manner in which places, such as their hometown of Stevenage, are affected by rampant neo-liberalism.

From the get-go, Bad Breeding make their intentions known. The opening title track sounds what would happen if Crass and METZ had a child together, combining no-frills UK punk with rhythmic experimentation and noisy production choices. This amalgam continues throughout the record, but presents itself in a variety of different ways and develops as it progresses. ‘Theatre of Work’, for example, utilises wild horns and a slow tempo to create an unnerving atmosphere, while ‘C.S.A.M’ opts more for out-and-out fury.

The final track, ‘Tortured Reality’, is a long, spiralling stream of consciousness fuelled by harsh, grating guitars. It seems to go on forever, working as if to put the listener into a demented trance. It’s the perfect ending to such a purposefully confrontational record.

Sonically, ‘Exiled’ is a fantastic album, full of left-field instrumentation and interesting structural ideas, but when you take into account the bigger picture, it becomes something more. This album is a statement, and it truly feels like it carries some weight behind it thematically. Bad Breeding have created an unflinchingly ugly portrait of modern Britain here, and it feels vital.

‘Exiled’ by Bad Breeding is out now on One Little Indian Records.