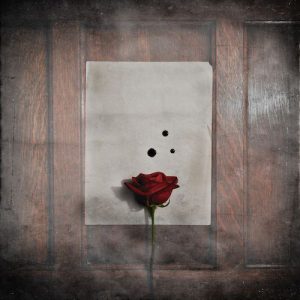 It’s encouraging to see the increased interest in Hell Is For Heroes, particularly when they spent most of the 2000s seemingly overshadowed by Hundred Reasons’ bigger presence in UK post-hardcore. More than that though, that goodwill has seemingly spilt over onto vocalist Justin Schlosberg’s solo project August Spies, pivoting in a direction heavily inspired by lush, layered electronica and indie-rock.

Naturally, the final product is a very different beast than Hell Is For Heroes, but Schlosberg can actually pull it off rather well, and for a debut EP, ’Corruption Of The Human Heart’ has quite a lot to dig into. For one, the transition to this slower, more tentative brand of music has come surprisingly easily, founded on beds of pianos and strings that build in a suitably methodical way. Thrills are rather minimal overall, but the swirling, warping knock of ’This Is How It Ends’ and the icy, poised piano of ’You Killed My Love’ show a much greater focus on robust composition that’s much more interesting.

Granted, the slow burn won’t be for everyone, and Schlosberg’s broader, less nuanced vocals can occasionally feel a bit too stark amidst material this focused mood and atmosphere. If anything, it can feel reminiscent of an artist like Nick Cave as a creeping, sonorous presence among a canvas that’s a lot more delicate. Of course, a direct comparison might be pushing it but ’Corruption Of The Human Heart’ does give off that vibe, and moving closer to that territory wouldn’t be out of the question with a bit more refinement.

Right now though, it’s easy to tell that August Spies is a side-project, particularly in its off-kilter nature that’s playing to distinctly personal interests for Schlosberg. But even so, ’Corruption Of The Human Heart’ is a consistently interesting and thought-provoking listen that’s definitely left room to grow. Regardless of how much Schlosberg feels fit to release under this moniker, to see what happens next could be potentially fascinating.

‘Corruption Of The Human Heart’ by August Spies is out now.