Review: As It Is – The Great Depression 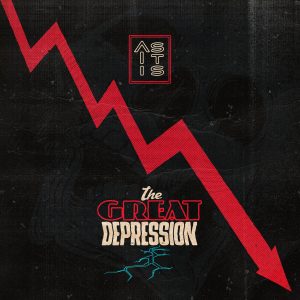 If ’okay.’ proved anything, it was that As It Is have far more ambition than the majority of their UK pop-punk peers. Beneath its glossy, poppy surface was a much more unnerved album, exploring the modern obsession with repressing anything remotely wrong, but even then, it didn’t get the attention for its vision that it rightfully should.

With ‘The Great Depression’ then, As It Is are taking similar strides, but aiming directly for the jugular more than ever before. This is an openly darker, angrier album, firing shots at the ambivalence that much of modern society feels towards mental health issues, and attacking with due force. Snarling post-hardcore riffs dominate, while the likes of ‘The Fire, The Dark’ and ’The Stigma (Boys Don’t Cry)’ see Patty Walters dipping into harsher vocal territory that feels completely natural in a rawer setting (even if his nasal cleans still feel a bit out of place among it all).

If anything, As It Is could afford to go a bit harder with their approach; what they’ve got is definitely good pretty much across the board. It’s a noticeable step up from their previous material, but taking it just that step further would make it even better. There’s clearly verve on ’The Wounded World’ or the confessional ’The Truth I’ll Never Tell’ that’s pretty great, but with the stodgy ’The Question, The Answer’ and an utterly wasted guest turn from Underøath’s Aaron Gillespie on ’The Reaper’, there’s a distinct feeling that As It Is are unnecessarily holding themselves back from really erupting.

Even so, ’The Great Depression’ is the sort of impressively detailed and nuanced album that’s well within As It Is’ wheelhouse, but rarely gets acknowledged to the extent it should. Hopefully, this could be what changes that, blessed with extra force and grit that can maintain a significant mainstream presence, while nudging themselves in the right direction to do more exciting things.

‘The Great Depression’ by As It Is is released on 10th August on Fearless Records.