Review: As Cities Burn – Scream Through The Walls 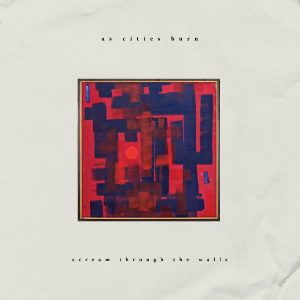 As Cities Burn split up ten years ago. They returned as a touring band and welcomed back original screaming vocalist TJ Bonnette. Having settled with this line-up, they have finally created new music. ‘Scream Through The Walls’ is a chance to reinvent themselves. For the most part, it succeeds.

After ending their first tenure with progressive rock albums, the band has been forced to step back in order to push forward. The music here is angular, awkward and unflinching. Hence, you’re never given an easy ride, but its variety can be rewarding. With their roots in the mid-2000s screamo scene, it’s no surprise the songs are free-form with no real choruses. Instead, Cody Bonnette scatters melodic hooks around like shards of diamond. They catch you out and keep you interested. Mostly, it works well.

The band wastes no time in reacquainting you with TJ Bonnette’s angsty yell, but ‘Live Convinced’ struggles to ground itself. It doesn’t drive hard enough to support what he’s doing and the background noodlings feel disjointed. Thankfully, the song-writing is so varied he fares far better elsewhere. ‘Bright White Light’ and ‘Maybe’ feel like classic screamo tracks because the duelling guitars and vocals are so effective.

Unsurprisingly, the album’s most accessible songs were chosen as singles. Yet, even ‘Chains’ starts uncomfortably, but by evolving throughout its runtime maintains a real sense of fun, without having to resort to a chorus. ‘2020 AD’ also flirts with big melodic parts to real effect. However, at its best ‘Hollowed Out’ is audacious while streamlining a tonne of great ideas. Sadly ‘Venture’ never finds what it’s supposed to be. It ends up as a mishmash of parts and even grafting on a gang-chant just can’t save it.

‘Scream Through The Walls’ is a challenging melting pot of ideas. When it knows what it wants to be it’s adventurous, coherent and interesting, but parts of it could have done with stewing a little longer.

‘Scream Through The Walls’ by As Cities Burn is released on 7th June on Equal Vision Records.