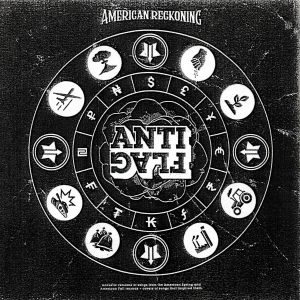 It’s impressive that Anti-Flag have remained a relevant social and political force for as long as they have. Obviously punk and politics have gone hand in hand virtually since the genre’s inception, but where so many have fallen away from the cause, Anti-Flag have forged ahead and kept their vision of standing against injustice clear.

Still, it’s nice to see that even acrimonious, politically-scrutinous punks can still get a kick out of capitalism because there’s really no other reason for ‘American Reckoning’ to exist other than that. Essentially, this is a collection of acoustic renditions of tracks from their last few albums with some covers tacked on for good measure, possibly the most inessential thing Anti-Flag could’ve released, and it feels it too. After all, the whole point of tracks like ’American Attraction’ or ’Racists’ is hit with punch and venom, something which frail acoustic versions simply can’t do.

At least the covers are marginally better, but again, it feels like Anti-Flag running on autopilot more than anything. Even though they’re not necessarily bad, a note-for-note transposing of Buffalo Springfield’s ’For What It’s Worth’ or a strangely rickety cover of John Lennon’s ’Gimmie Some Truth’ aren’t prime material by any means. If anything, they feel among the most obvious picks a band like this could have made, standing as something to bulk this package out and nothing else.

It honestly winds up as a release that has no real selling point besides the opportunity for diehards to here new songs in a different way. For everyone else though, ’American Reckoning’ is ultimately just pointless, and not something you’re likely to ever return to.

‘American Reckoning’ by Anti-Flag is released on 28th September on Spinefarm Records.