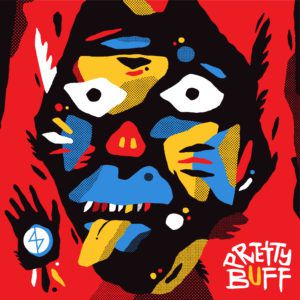 With links to Trapped Under Ice and Turnstile amongst their ranks, you’d think Angel Du$t would be a stomping hardcore juggernaut. Nevertheless, as anyone who has followed them since their inception in 2013 will tell you Angel Du$t allows its members to embrace their more melodic side. Although past releases have shown their ties to hardcore, their Roadrunner Records debut, ‘Pretty Buff’, confidently cuts them loose.

Full of jangly acoustic guitars and hints to 90s alt-rock and punk, it’s a record is fun and, at times, frustrating. ‘No Fair’ soon sums up what to expect; stripped back instrumentation and a flimsy, easy to grasp melody. ‘Big Ass Love’ and ‘On My Way’ fares somewhat better making good use of 4-chord punk and shuffling tempo. It ideally comes and goes within two minutes.

With 13 songs in half an hour, it’s a breezy listen with songs such as ‘Push’ scuffling along with a sunny disposition. While as cheesy as it might be, ‘Bang My Drum’ helplessly leaves you bobbing along with its beach-pop tone and rich saxophone.

Still, despite its quick runtime, Angel Du$t rarely take things up a gear. Later cuts ‘Want It All’ and ‘Where I Am’ come off as recycled from earlier tracks. Throughout, it feels like a record that lives in a lo-fi, softer skin. Besides the Chili Peppers-esque ‘Biggest Girl’ and the aforementioned ‘Push’, they rarely threaten to crank it up. It’s not until the closing number, ‘Five’, where they show some strong drive.

Nevertheless, the element of fun is what threads this album together, and ends on a comfortable note with Justice Tripp’s ode to walking his dog, ‘Park’ and penultimate ‘Take Away the Pain’, which rides on a blues-y wave with newfound love lyricism complimenting the return of that saxophone.

If you look beyond where its members come from, ‘Pretty Buff’ has a tendency to win you over with its straightforward melodies and uncomplicated instrumentation. An unexpected but highly enjoyable record.

‘Pretty Buff’ by Angel Du$t is out now on Roadrunner Records.