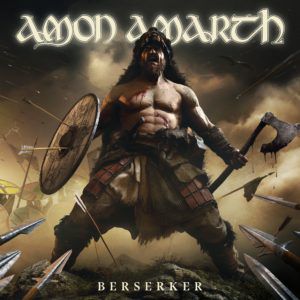 More of the same is not a bad thing. Not when you are Swedish titans Amon Amarth. They have played Viking-flavoured death metal since 1992 and it’s fair to say they have a firmly established sound. ‘Berserker’ is their 11th album, but their rule of thumb still applies; treading the same path is dangerous, you had better bring your highest calibre weaponry.

If you’re unfamiliar with the term ‘Berserker’ it describes ancient Norsemen who fought in a trance-like state. It’s not a bad description of how the record sounds either. It’s focused, frantic and absolutely furious. Without the concept album trimmings of 2016’s ‘Jomsviking’, the new record never gets bogged down by a narrative, making it feel freeform and flighty. You get a few acoustic guitar trills on the opening to ‘Fafner’s Gate’ and a little piano closes the record, but the rest is a glorious whirlwind of riffs. ‘Valkyra’ and ‘Crack the Sky’ feature two of the best, but there are no weak links. All the riff work from Olavi Mikkonen and Johan Söderberg is both powerful and fun.

Production duties were handled by Jay Ruston. It was an interesting choice, but a good one. Despite previously mixing the band’s work he is known for more outlandish records, including Steel Panther and Fall Out Boy’s ‘Mania’. However, his technique brings the best out in the Swedish band’s work.  Each song is hard-hitting in its own right, but the album functions as a whole.

Having always written songs about Norse mythology, it’s funny how the huge success of Marvel’s Thor movies has suddenly aligned their music with the zeitgeist (there’s even a song here called ‘Mjölner, Hammer Of Thor’). Combined with the album’s production, it could certainly help grab wider attention.

Like its namesake, ‘Berserker’ is a big vicious brute of a record. By falling back on solid song-craft, Amon Amarth have propelled their music forward. Crammed with excellent riffs, it’s relevant, exciting and is certainly one of their career highlights.

‘Berserker’ by Amon Amarth is released on 3rd May on Metal Blade Records/Sony Music.