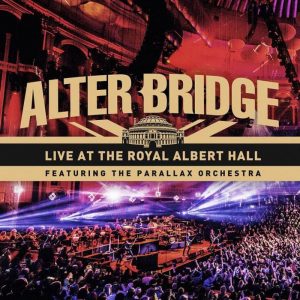 Given that they’re the epitome of modern arena rock, Alter Bridge were always going to do something like this. This sort of spectacle is the foundation that lasting greatness is built on, and so ’Live At The Royal Albert Hall’ captures the band’s ambitious show at the titular venue last October.

And the easiest thing to get out of the way first is that this album is pretty much for diehards only. For one, this two-hour-long extravaganza is enough to test anyone’s mettle. Still, for anyone that is an Alter Bridge fan, this is pretty much the ultimate collection to have, spanning the band’s entire catalogue with great precision and augmenting it with orchestral grandeur, courtesy of theParallax Orchestra.

Perhaps the most surprising thing is how good this all sounds. Considering how slapdash live records can be, there’s a level of clarity that’s genuinely incredible here. Whether that’s in Myles Kennedy’s unwavering vocal stability throughout, or how effective the Parallax Orchestra are, particularly on slower, more melodic cuts like ’Before Tomorrow Comes’ and a frankly gorgeous segue between ’Wonderful Life’ and ’Watch Over You’.

As for the heavier side of Alter Bridge’s canon, they’re able to make that equally impressive by not sacrificing their might for the orchestra or vice versa. Thus there’s a sense of enormous bombast to ’Cry Of Achilles’ and ’The Other Side’ that’s probably most comparable to Metallica’s ’S&M’ in terms of how it elevates them. Even if this album won’t gain the same status over time, the fact that the parallels throughout are so stark is definitely a good thing.

And sure, it can be an endurance test at times, so much so that it can be difficult to get through the whole thing in one sitting. But for dyed-in-the-wool Alter Bridge fans, ’Live At The Royal Albert Hall’ is about as much as you could ask for. Get this and maybe splash out for the DVD too, and you’ll be sorted out for a good, long time.

‘Live At The Royal Albert Hall’ by Alter Bridge is out now on Napalm Records.