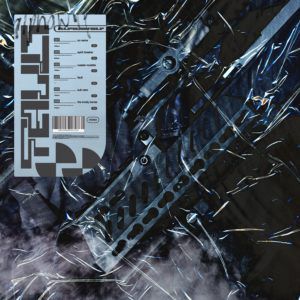 Australia’s Alpha Wolf know a little style goes a long way, especially in a genre like deathcore. You’d know if you’d seen guitarist Sabian Lynch attacking his guitar, long hair dyed white and a surgical mask obscuring his features. So if they didn’t catch your attention with ‘Golden Gate; Water Break’ from their 2017 debut album, they’re about to unleash new EP, ‘Fault’, just to prove it’s not a case of style over substance.

While ‘No Name’ opens up in lacklustre deathcore fashion, it’s a definite tease, because within a minute the song explodes into a stream of ideas, riffs and right turns, keeping you on your toes as it batters you again and again with power.

More importantly, it’s sustained throughout the five-song set (‘Fault’ is an interlude) as you’re continually assaulted by different takes on their base sound. Unusual drum-patterns and polyrhythmic guitar riffs make up the bulk of the EP, but everything is both powerful and thoughtfully executed. You’re never far from a huge breakdown, but importantly, when they come, they hit hard and feel earned, ‘Sub-Zero’ even fades out before coming back to smash you around the ears one final time.

Whether he’s violently sneering on ‘Spirit Breaker’ or spitting out rhythms on ‘Russian Roulette’, Aiden Holmes’ vocal delivery deserves a special mention. He remains impressive and arresting throughout. Lyrically, he keeps avoids falling back on cliché and when he does toss out an f-bomb, he does so at exactly the point where it’s most effective.

It’s a shame the EP is only five songs because it feels like they’ve just got going and have plenty to say. While trying to grab you by the jugular, there is always a good mix of screeching guitar with few nasty little licks to offset the powerful down-tuned main riffs. So while it’s likely you’ve heard their approach before, it probably didn’t hit quite so hard.

‘Fault’ EP by Alpha Wolf is released on 19th April on SharpTone Records.