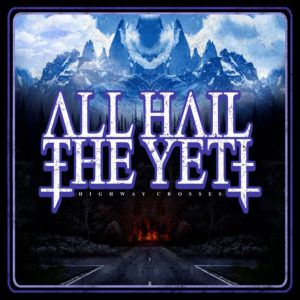 California’s All Hail The Yeti list among their interests “whiskey, rock n’ roll and pine trees’”. Right there you’ve pretty much got all the ingredients for their music. Mixing a monolithic take on hard rock with a slow stoner sound, until now their songs have always described a dark wilderness. However new album, ‘Highway Crosses’, attempts to tame the wilder, more beastly, elements and while many songs retain that former bite, the whole ends up being rather toothless.

In many ways, it’s a frustrating record. Early songs ‘Live Everyday’ and ‘Slow Season’ cruise along displaying a carefree mix of riffs and viciously growled vocals, enhanced by Nicholas Diltz’s sleepy but catchy choruses. However, the midsection reveals the album’s shortcomings, it’s lacklustre and really isn’t helped by a running order that awkwardly crams the catchier, more fun songs at the beginning.

Producer Matt Hyde has given the record a quality aggressive sound, but the longer songs struggle to hold your attention. The spark just isn’t there, making them feel stretched thin. For example, ‘Seymour Avenue’ struggles to find its footing and the chorus to ‘World is Cold’ is so slack, it sounds like the band has fallen asleep while playing it.

Numerous times the sharp bellowing of main vocalist Connor Garritty snaps the band out of their torpor, but it’s a trick he can’t repeat every time. While it’s easy to forgive the blunt lyrics you find elsewhere, ‘Anti-Social Media’ is a lot less clever than it thinks and the results are absolutely cringe-worthy, losing sight of the band’s aesthetic and misunderstands their audience. It’s a shame because the song is built around the kind of guitar lick the album is crying out for.

Put back-to-back with their previous work, you can’t help but be disappointed by ‘Highway Crosses’. You will find some great moments, enchanting choruses and solid riffs but the album is repeatedly let down by poor choices, making it extremely difficult to love.

‘Highway Crosses’ by All Hail The Yeti is released on 26th April on MinusHead Records / Rough Trade Distribution.