Review: All Get Out – Northport Sessions EP 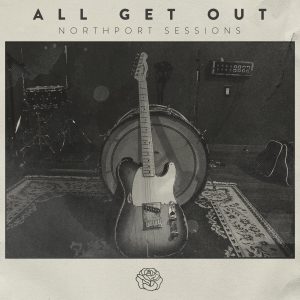 It may be assumed that this collection of reworked tracks was recorded in Northport, Alabama. In fact, All Get Out‘s Nathan Hussey, Kyle Samuel and Dom Nastasi never met during the creation of ‘Northport Sessions’, Hussey the only member in the titular location.

Hussey says his move there inspired this experimental reimagining of several of tracks from the band’s latest LP, ‘No Bouquet’, alongside one new track –‘Northport’. These fresh versions present a largely stripped-down, restrained take on what was an impressive, uplifting record with both sensitivity and bite.

One aspect that made ‘No Bouquet’ successful was the sharp guitar work of Kyle Samuel, which remains in flashes, but the focus turns to texture and atmosphere. Distanced Brand New fans might find a haven in ‘Goddamn’, a deliciously dark and staggered upgrade on the original with Hussey’s softly distorted voice barely above a whisper.

At times, the angle forces a closer examination of the melodies, already stellar in their original form, but as is the case with ‘First Contact‘, now pushed to the forefront of stark pianos, acoustic sensibilities and electronic flashes. Those synths and keyboards could have been inspired by the Stranger Things theme for much of ‘Archives’ before bursting into shrill, equally retro-sounding flourishes that merge with summery guitars.

Samuel’s skilful playing is no more impressive than on the new title track though, his bluesy, overdriven line leading a gorgeous, brief track devoid of strict rhythm and betraying influences leaning towards folk and Americana.

The obvious criticism is over the need, or lack thereof, for new versions of relatively new tracks. But the ‘No Bouquet’ tracks are good enough in and of themselves to merit another, fresh look. Meanwhile, the new track is so impressive, one only wishes there was more. All Get Out once again pull out all the stops.

‘Northport Sessions’ EP by All Get Out is out now on Equal Vision Records.