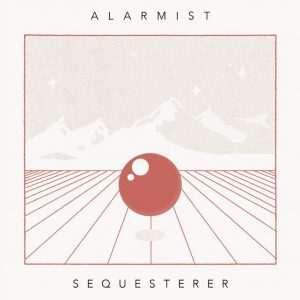 Dublin instrumentalists Alarmist are fast becoming a name synonymous with quality in the UK math and post-rock scene. With two EPs and a great debut LP already under their belt, the band’s sophomore record, ‘Sequesterer’, acts as undeniable confirmation of their status as ones to watch.

‘Sequesterer’ is a fascinating voyage through jazz and electronica-influenced post-rock, full of interesting instrumental and structural experimentation. Frantic, mathy drumming fuels a spiralling vortex of synths, bubbling basslines, and trebly guitars. As this unique sound leads the listener further and further down the rabbit hole, more and more vibrant imagery comes into realisation; 8-bit arcade games, sci-fi extravaganzas, and trippy cinematic dream sequences could all use any song on this album as a soundtrack.

The way that Alarmist manage to so effectively evoke ideas of retro-futurism and grand-scale exploration through their choices in instrumentation alone is mightily impressive. With an emphasis on space-age synthesisers on tracks such as ‘Expert Hygiene’ and ‘Lactic Tang’, the record is lent a real sense of vastness. This is helped along by some brilliant, slow-building song progressions, a whole lot of reverb, and the odd sprawling epic (see the album’s best moment, ‘Bronntanasaurus’).

If there is one complaint to be made of ‘Sequesterer’, it’s that at times the album can get a little lost within itself. With such a focus on spacey atmosphere and wandering structure, it’s unsurprising that some of the songs here seem to veer off course and somewhat compromise the flow of the record as a whole. It seems almost like the band are distracted by their own experimentation, which is understandable when it’s often so interesting.

Still, Alarmist‘s daring foray into so many different corners of the musical world on this record is not a feat to be taken lightly. Whilst, by its nature, ‘Sequesterer‘ won’t be for everyone, those interested in post-rock and instrumental music will find countless reasons to love it.

‘Sequesterer’ by Alarmist is released on 19th July on Small Pond Recordings.