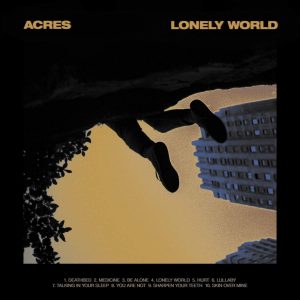 Acres burst out of Portsmouth with 2017’s ‘In Sickness and Health’ EP. Their emotionally-charged post-hardcore sound was surefooted enough to gain the band quite a following. Yet their debut album, ‘Lonely World’ wants to take them further. Hence, it’s far more accessible and uplifting.

After making a hugely ambitious entrance with the overblown intro ‘Deathbed,’ the album quickly settles into the band’s signature sound. It’s all about atmosphere, delayed guitars and soft, heartfelt vocals from Ben Lumber. It allows the songs to work their way under your skin, but they bite just when you lower your guard. It’s very effective. Notably, the extremely harsh scream favoured on their EP is scaled back. It’s less angular and better integrated with the album’s tone, particularly on ‘Medicine’.

Dynamic shifts define the album. Songs such as ‘Not You’ and the title track thrive on the gentle atmosphere of their introductions and soar out into choruses, but there is variety too. ‘Taking In Your Sleep’ keeps things fast and fun while ‘Hurt’ blends a distressing guitar tone with metalcore style breakdowns. However, the interwoven guitars and sincere vocals keep the songs focused.  The overall sound is similar to bands such as Holding Absence and Parting Gift although less distinct, and not quite so forward-thinking.

Despite similar construction, no two songs on the album occupy the same space. For example, ‘Be Alone’ uses its swirls of guitars to create a warm sound. It’s a contrast to the colder sound, unexpected, and creates a really different flavour. ‘Sharpen Your Skin’ also stands out by using a measured falsetto during the chorus. While the band mostly explore atmospheric hardcore territory, ‘Lullaby’ is more traditional sounding, utilising delicate guitars without needing to become heavy. It shows another side to the band.

Fans of emotive post-hardcore will find much to enjoy on ‘Lonely World’.  Acres are sure in their sound and it’s a satisfying debut. As they confidently explore their comfort-zone, the results are heartfelt and affecting, making it easy to recommend.

‘Lonely World’ by Acres is released on 9th August on Wolf At Your Door Records.