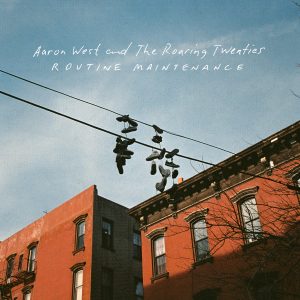 Following some much-needed downtime after another hectic touring schedule for The Wonder Years, frontman Dan Campbell returns to his literary “character study” side project – Aaron West And The Roaring Twenties. After a suicide attempt, the death of his father and unborn child, his wife leaving him and homelessness, it makes you wonder what hell Campbell will put West through next.

West’s story sees him accepting the past with glimpses of hope of a new beginning. On ‘Just Sign The Papers’, he desperately urges Diane to help mutually move on “Let’s find an end to the gloom, I’m sorry for every single thing I put you through.”

Blaring horns and brass sections heighten ‘Routine Maintenance’s’ rich, life-affirming choruses exposing West at his most vulnerable, such as with opener ‘Lead Paint & Salt Air’ and subtly creeps in on ‘Wildflower Honey.’

Retaining the rustic charm of 00’s indie folk, the project preserves its own unique sound, mostly relying on stripped-back melancholic rhythms, such as with ‘God & The Billboards’ where warm guitar slides and a fiddle section complimenting the comforting touch.

The smatterings of folk and Americana are layered in a minimalistic way, allowing you to focus on the narrative. Sticking true to his unlucky circumstances, ‘Bloodied Up In A Barfight’, West fights for his life with Campbell’s shaken, quivering vocals providing the perfect set piece. It’s him against the world and you’re rooting for him all the way.

It’s always interesting to ponder where the lines blur, how much of Aaron’s story is based on Campbell’s own life experiences, with his portrayal of Aaron being so lifelike.  This, of course, adds to the allure of how impactful the songwriting is on ‘Routine Maintenance’, ending on a more positive note with the title track, concluding an essential chapter to Aaron West & The Roaring Twenties’ bountiful story.