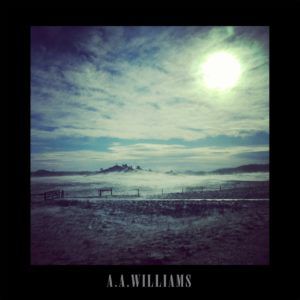 At the end of last year, Holy Roar Records announced a mysterious new signing, a solo artist under the moniker A.A. Williams with a self-titled debut appearing imminently. Given the incredibly high standard of the label’s recent output, it made sense to jump on social media, but a quick search revealed very little presence, only furthering the intrigue. Finally listening to the EP, you understand their approach, the music speaks for itself and it’s very special indeed.

As home to some punishingly heavy records, it comes as a surprise that Holy Roar signed an artist whose music sits on a different spectrum, but these four songs focus solely on the label’s other great love, atmosphere. Calling them ballads or mentioning pianos and acoustic guitars does the music little justice. While such instrumentation is woven throughout, the musical soundscapes are layered around thudding percussion, strings, and Williams’ alluring siren’s voice. An approach that falls under the same haunting post-rock umbrella as Emma Ruth Rundle’s darker second album, or indeed her band Marriages, although such comparison feels simplistic and shallow.

If you laid on your back and watched clouds boil across a turbulent sky, it might remind you of the way ‘Cold’ evolves. A piano is joined by mournful guitars before beautiful vocals soar across like the breeze over a wintry fjord. The real mastery here is the addition of further elements, both metaphorically and stylistically. You hear folk music but feel the flickering of a campfire. Both ‘Control’ and ‘Terrible Friends’ share this trait, evoking a mixture of feelings you can’t quite put your finger on, in very different ways. This laces the recording with hope, never becoming too sad or sombre. Leaving the quieter, dusky, more contemplative ‘Belong’ to close the set.

All four songs share a beautiful restraint, carefully eking out elements, never offering too much or too little. You can listen on repeat for hours and never feel like you’ve explored it fully. A flawless, beautiful EP.