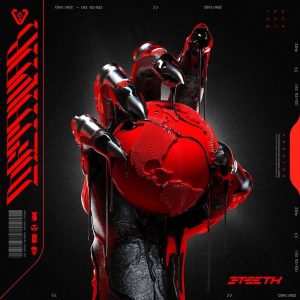 With their strong graphic identity, it’s no wonder Los Angeles’ 3Teeth caught the of Tool. A career-boosting stint as the band’s main supports saw them join Century Media Records. Now the industrial machine are back with third album ‘Metawar’. After last year’s collaboration EP with noise-monsters Ho99o9, hopes are high. However, as the new album unfolds you quickly discover which band did the heavy lifting on that release.

Hoping to catch your eye, the band produced five singles with slick music videos, sadly the songs struggle to catch your ears. ‘American Landfill’ and ‘Affluenza’ might revel in gated drums and stomping basslines, but truly great singles shouldn’t have you checking your watch.  Partly, this monotony is due to the record’s sludgy sound. True, it evokes an industrial landscape, but it also smothers many of the band’s ideas. Not that they had many to begin with.

Peeling back the layers of white noise does reveal interesting undercurrents.  On ‘Altaer’ the sleazy bassline creates a strange atmosphere, which only enhances the groove.  ‘Time Slave’ uses a similar trick, offsetting the driving riffs with uncomfortable screeching synths. It’s a frantic sound, which really stands out. ‘Sell Your Face 2.0’ also uses this to great effect. It’s stronger, more confident and genuinely powerful, even if its chorus is woefully forgettable.

Vocalist Alexis Mincolla is often buried in the mix, and when he’s not, he doesn’t have a lot to say. True, ‘President X’ might have a political slant, but rather than rise up, you’re more likely to nod off.

Producer Sean Beavan is one of the genre’s old hands, but the songs here would really have benefited from a fresh perspective. It’s no surprise the best are crisper, more melodic and don’t feel like a pale imitation of an early Manson record.

Derivative and competent in all the wrong ways, ‘Metawar’ struggles to be more than the sum of its parts. The solid production gives it a strong generic flavour, but there aren’t enough interesting ideas to hold your attention for long.

‘Metawar’ by 3Teeth is released on 5th July on Century Media Records.