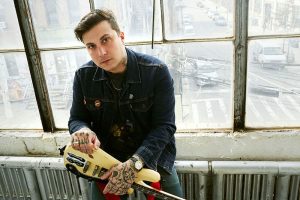 As May comes to an end, many music fans will be heading to the nation’s capital for a variety of reasons; Camden Rocks, All Points East, and Alexisonfire at Alexandra Palace. However, for those who aren’t going to London, there are a few notable new releases to get into.

For starters, there are a trio of albums from people who are associated with other bands. My Chemical Romance’s Frank Iero returns with his third moniker, Frank Iero and the Future Violents, as they release ‘Barriers’. Duff McKagan steps away from Guns N’ Roses’ reunion tour to share a new solo effort in the form ‘Tenderness’. While Tesseract’s Daniel Tompkins delivers his solo debut outing, ‘Castles’.

Elsewhere, there is ‘Don’t Wait ‘Til Tomorrow’, the debut album from alt-pop group, Yonaka. Aussie metallers Cursed Earth rope in an impressive set of guest vocals as they return with ‘The Deathbed Sessions’.

As for rising and noteworthy acts, Scottish emo rockers Dude Trips and Mancunian post-metallers Pleiades both have new releases. While the Surrey town of Guildford has produced two promising bands as Morale and The Dabhands drop new EP’s.