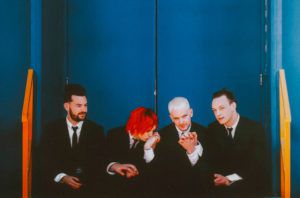 As the end of the year wind down continues, and with December being fairly quiet on the release front, today could considerably be the last “RTW” roundup of the year.

Nevertheless, there are some notable releases worth checking out. Admittedly, The 1975 aren’t a band we probably haven’t covered much in the past but with their third album, ‘A Brief Inquiry into Online Relationships’, getting plain of attention, we couldn’t ignore it.