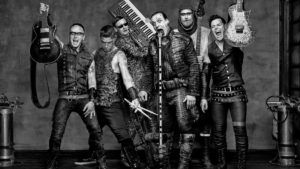 After a few hectic weeks, we thought today’s round of releases would be fairly quiet. How wrong we were?

German industrial metal titans Rammstein return with their first album in almost a decade. While Biffy Clyro have surprised fans with a set of new songs. ‘Balance, Not Symmetry’ serves as the soundtrack for a film of the same name, co-written by vocalist Simon Neil.

Elsewhere, Stray From The Path drop a collection of tracks captured from their European tour earlier this year. Acclaimed American indie rock band The National release ‘I Am Easy to Find’. Grindcore group Full of Hell deliver their Relapse Records debut in the form of ‘Weeping Choir’.

There are also new releases from Aussie up-and-comers Eat Your Heart Out and emerging UK talent in the form of Brightlight City, Harbinger and Knuckle.