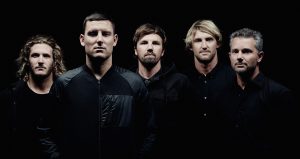 Here in the UK, it’s another Bank Holiday weekend and while the weather might be pretty unpredictable, we can tell you there is an abundance of notable new music releases out today.

Aussie metallers Parkway Drive lead the charge with their outstanding new album, ‘Reverence’. If you want even more rock in your life this week, then Shinedown and The Word Alive also return with new albums. Someone else returning today is acclaimed UK indie-folk singer-songwriter, Frank Turner.

Elsewhere, Scottish pop-punks WOES give us ‘Self Help’. Birmingham emo/pop-punk group, Layover, end their hiatus with ‘Your Laughter Never Leaves’. While cinematic metallers The Ever Living release ‘Herephemine’.

What releases are you looking forward to hearing? Let us know in the comments.