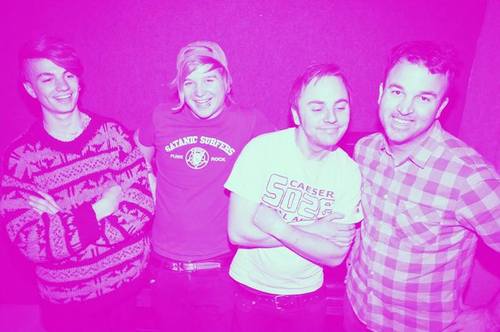 This week’s edition of Pop-Punk A&R sees Already Heard sit down with Luke Semlekan-Tansey. Luke is lead singer of Brighton ‘posi-punk’ quartet, and the band with the best wrestling-themed name around, Summerslam 88. Having formed in 2012, Summerslam 88 provide a pacey and intense brand of raw, melodic punk, blending the raucous force of hardcore punkers The Steal with mid 90’s ‘Ixnay On The Hombre’-esque pop-punk. Their most recent release, November’s’ Big Trouble in BN1’ is available on Bandcamp.

Having formed in 2012, Summerslam 88 provide a pacey and intense brand of raw, melodic punk, blending the raucous force of hardcore punkers The Steal with mid 90’s Ixnay On The Hombre-esque pop-punk. Their most recent release, November’s ‘Big Trouble in BN1’ is available on Bandcamp.

AH: Did the environment you grew up in help or hinder/encourage or discourage you pursuing a career in music?
Luke: Making music has never been a vehicle for me to make a career, as much as I’d like for making and playing music to be my job. My mum was fairly supportive of me playing in bands as a teenager and bought my first instrument, a saxophone, but was keener on me getting qualifications and going to college than sitting in a van my friends and living on bread, cheese and cider.

AH: What is your proudest achievement as a musician?
Luke: I’ve had the opportunity to support some awesome bands and make music with some great people, but without dwelling on the past, ‘Big Trouble in BN1’ is one of the best, if not the best, record I’ve ever been a part of. It sounds awesome and took us two totally hassle free days to complete from start to finish. I’m extremely proud and happy with the result.

‘Big Trouble in BN1’ is a notable step up in both maturity and class from the self-titled full length. Short and sweet, the 5-track EP comes in at just over 9.5 minutes and whilst it certainly whets the appetite for the next instalment, at no point does this become lamentable or frustrating because you’ll be having too much fun listening. The guitars are excellent throughout and the cohesion with the gnarly vocal delivery of Semlekan-Tansey makes it near-impossible to sit still throughout.

AH: Which individuals outside of your band mates have helped you – musically – achieve what you have so far?
Luke: Again, without delving into ancient history, Neil Kennedy at The Ranch has recorded two records for us since we started. As recording goes, it’s been the most fun and least hassle I’ve ever had making a record, and I can speak for everyone in the band in saying that we’re overjoyed with how it sounds. He’s always been most accommodating with us despite the numerous emails back and forth trying to book in a date around our personal holidays etc.

Having worked with a number of notable UK acts including Don Broco and Burn The Fleet, The Ranch’s Neil Kennedy was also the man behind the controls for Departures’ most recent full-length, 2012’s ‘Teenage Haze’. The Glasgow natives re-enforce Luke’s sentiment, scaling the best part of The UK to secure The Ranch for their first release with No Sleep Records. Kennedy’s input to ‘Big Trouble in BN1’ has helped Summerslam 88 deliver a more mature sound with an element of the sheer rawness of the debut album reeled in, without at any point forgoing the urgency that makes the band so appealing.

Big Trouble In BN1 by SummerSlam 88

AH: How do you see the state of the pop-punk genre in 2014?
Luke: In 2014 pop-punk is a pretty broad term to describe a lot of bands that fit neatly into a whole bunch of ever evolving subgenres. I’m not sure which one we fit into, but that’s beside the point. There are a lot of UK bands doing awesomely refreshing stuff at the moment and getting a lot of recognition, which is great for pop-punk and punk in general as a whole I think. Hopefully that will filter down to smaller shows and bands like us.

In short, I think it’s cool that there are some people out there that want to play pop-punk in 2014 and not take themselves too seriously or have any delusions of grandeur. Support your local pop-punk band!

AH: What is your favourite pop-punk record of all time?
Luke: Panda-Moanium by Pickled Dick (now known as Mike TV). Do yourself a favour and find it on Bandcamp. It’s probably the pop-punk record I listen to the most these days.

AH: For those of our readers who are new to the band, what sets you apart from your contemporaries within the genre?
Luke: For the most part we play fast paced, no nonsense pop-punk with youth crew style gang vocals. We don’t do easycore breakdowns and I haven’t sung about pizza or made any Goonies references yet!

You have to pull at the lines of ‘pop-punk’ just a little to justify Summerslam 88’s inclusion, but there is undoubtedly something here to keep both the purists and the modern day pop-punk enthusiast fulfilled.