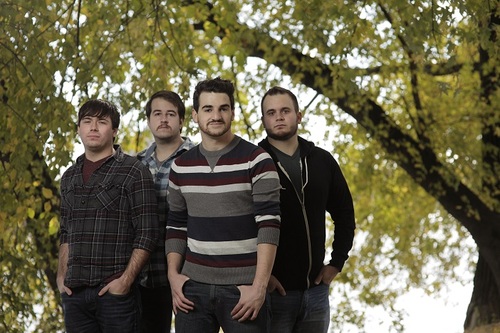 This week’s edition of Pop-Punk A+R sees AH sit down with Moving Brooklyn frontman Kevin Tiernan. The Connecticut rockers released debut EP ‘Intervals’ in January, laying down an impressively mature six-track. A band that already seems to have developed a quiet confidence in their dynamic, Tiernan discusses some of those who have helped and inspired the band’s progress thus far.

AH: Did the environment you grew up in help or hinder/encourage or discourage you pursuing a career in music?

Kevin: My mom’s side of the family has always been musical. My grandpa and grandma met while they were both playing at a radio station. So being a musician was definitely encouraged, and I was fortunate enough to have supportive parents. The great thing about music is the network that it can create. I’ve made most of my best friends through attending and playing shows.

AH: What is your proudest achievement as a musician?
Kevin: My proudest moment as a musician is probably writing and recording our EP, Intervals. A number of different things led up to making it. With my old band, I recorded a full length in 2007. That was the last I was in a studio setting before last year. So it was a good chance to learn and grow over the years, both personally and musically.

A positive, if safe debut release, ‘Intervals’ presents a combination of beautifully executed vocal melodies and driving rock breakdowns. The sound is, in part reminiscent to mid-2000’s rock; Anberlin, Northstar both evident as influences when listening to ‘Symmetry’ and ‘If I Ever’. The band draws on the more pop-punk side of their arsenal during ‘Divorce Rock Record’, without ever deviating from their vocally led tendencies ensuring a measured continuity and an unerring infectiousness throughout.

AH: Which individuals outside of your band mates have helped you – musically – achieve what you have so far? (other bands, label, management, producer, engineer etc…)

Kevin: It’s all probably relative, but it seemed like our local music scene was flourishing in the early 2000’s. I looked up to local acts like Hate To Have To Go Back, Changing Directions, and Saturday Matinee. Those guys were all big influences when I was younger. Some of our friends in bands and management have been really supportive of us. I owe a lot in particular to Fourth & Goal for expanding my horizons. John Naclerio also helped us out in the studio by engineering and producing our EP.

John Naclerio at Nada Studios in Albany, NY is credited with a hand in a number of notable records of the last twelve years, none more so than Brand New’s debut full length ‘Your Favourite Weapon’. Naclerio has also drawn acclaim for work with My Chemical Romance, We Are The In Crowd and Matchbook Romance. You feel, listening to the production on the EP, that Naclerio had a large hand in the band overcoming most of the teething problems that one tends to see with a debut release; there is no uncertainty over artistic direction, and no lack of continuity that frequently accompanies an early release from a young and inexperienced band, looking to embed a cross-section of rock influences into one EP.

AH: How do you see the state of the pop-punk genre in 2014?
Kevin: Pop-punk is definitely a load of fun to play. Kids wrap their arms around each other, scream in your face, and there’s a feeling of community. It’s interesting that the genre has become kind of an umbrella term. That label is a really open-ended, broad spectrum. For example, there are bands that I don’t consider pop-punk, but have songs that fit the definition. I love artists like You Blew It! and Pentimento who have a rawer sound—it’s awesome.

Pentimento & You Blew It! head the new wave of talent blurring the lines of punk, emo and indie, practicing a significantly less manipulated sound, instead prioritizing passion and honesty over production and hooks. Whilst offering little by way of comparison musically, Moving Brooklyn join a long list of their peers inspired by the recent Pitchfork-endorsed move towards the mainstream for emerging punkers excelling at their craft, the likes of Joyce Manor and Modern Baseball two names to add to this list.

AH: What is your favourite pop-punk record of all time?

Kevin: I don’t listen to pop-punk all that much, but it was a huge part of me growing up. One of my favourite records is ‘Make a Sound’ by Autopilot Off, which came out when I was in eighth grade. We went on a class trip to Washington, and I played it daily on my super sick CD Walkman. There are just so many good memories that I’ll always associate with that album.

AH: For those of our readers who are new to the band, what sets you apart from your contemporaries within the genre?

Kevin: None of us take ourselves too seriously. At a certain point, everything has been done before. What we do have is a connection to each other. I don’t know, but if any one of us left, it wouldn’t quite be the same. We set out to write music that hopefully calls back to what we grew up on. I want to grow and experiment with different songs.

Moving Brooklyn have established themselves a foothold in the East Coast scene with a catchy and thoroughly listenable debut EP. Keep your eyes peeled for the band’s new music video, ‘We Would Make Sense’, coming later this month.

“intervals’ by Moving Brooklyn is out now.