Pop-Punk A&R: Life On The Sideline 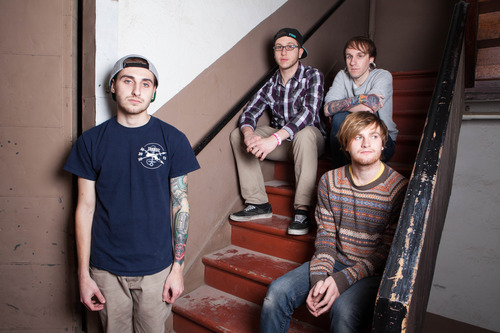 This week’s “Pop-Punk Approved & Recommended” looks at Connecticut’s Life On The Sideline whose debut album, ‘Honesty Is A Dying Breed’ dropped on Tuesday via Take This To Heart Records. A follow up to 2012’s ‘Outpatient’ EP, Life On The Sideline combine introspective emo sensibilities with an almost Wonder Years-esque intense and melodic punk forging an eminently listenable full-length in the process. AH talked to vocalist Nick DiCiancia to learn more.

AH: Did the environment you grew up in help or hinder/encourage or discourage you pursuing a career in music?
Nick:
That’s a good question. I think it definitely encouraged it, even though the people around me at the time did not. I grew up in a town full of self-centred peers who usually only cared about partying whenever and wherever they could. Honestly I wasn’t much different from them, in the partying sense. I hate to admit this, but as I think about it, I gave into activities like this because it was all I was surrounded with and though I was “supposed” to do it. If I could go back in time I would punch myself in the face, no one is “supposed” to do anything. Growing up I always felt like I was missing out on something, and the only time I really felt content was playing music. No one played music where I grew up, maybe 3 kids. I was constantly told by people, “you suck”, “quit”. I think this pushed me even harder, music was something I loved and having people tell me I couldn’t do it made/makes me want to try even harder.

Which individuals outside of your band mates have helped you, musically, achieve what you have so far?
Nick:
It hasn’t necessarily been individuals that have helped me, but the more terrible things I’ve had to go through. I always have way more passion when something’s pressing against me. I just get all worked up and usually a song just pours out. Then I feel WAY better.

Something that’s difficult to get away from when listening to Life On The Sideline is the sincerity and overwhelming sense that you are being invited into a very intimate personal space by hitting play; something with is conveyed vocally and lyrically but also with a shift of momentum throughout. DiCiancia is always very guarded when discussing the specific events that inspired the tracks, though there is no doubt that Life On The Sideline’s music very much does their talking for them.

AH: What is your proudest achievement as a musician?
Nick:  Last year someone messaged my Facebook and told me how our music helps them feel better when they feel like crap. I’ve had bands do that for me my entire life, but to be on the other end was unreal.

AH: How do you see the state of the pop-punk genre in 2014?
Nick:  Honestly, I don’t know, no-one does. Definitely still going, there’s too many hard working bands out now for it to die down. I guess we will have to wait and see.

AH: What is your favourite pop-punk record of all time?
Nick: I wouldn’t really label it pop-punk but, Transit’s ‘Listen & Forgive’. That record is seriously track after track of pure magic. I probably know every part to every instrument on that record.

An influence since day one for Life On The Sideline, Transit’s discography alone goes a long way to proving that you can take the pace off without forgoing any urgency and that melodic doesn’t have to be infectiously catchy. Life On The Sideline operate with a similar mentality, and although ‘Honesty Is A Dying Breed’ does duck and dive between structures and sounds, nothing ever comes across as forced and the transition from ambience to angst is delivered seamlessly throughout.

Life On The Sideline find themselves almost inherently beset with comparison to The Early November, which whilst not an inaccurate portrayal musically, is perhaps in need of development when discussing the new release. The vocal overlays throughout draw significant parallels to more recent Taking Back Sunday and whilst easily overlooked by the prominence and intensity of DiCiancia’s voice, the chemistry in the musicianship is impressive at an early stage in the bands young career.

p>AH: For those of our viewers who are new to the band, what sets you apart from your contemporaries within the genre?
Nick: We care about the music itself more than anything and we’re really big on doing what you love and chasing your dreams. We all work extremely hard. I sleep about 3-5 hours a night because I’m always so busy working on this band. I just don’t have time to sleep.

With ‘Honesty Is A Dying Breed’, Life On The Sideline has set out a likeable and exceptionally relatable record, and despite perhaps a lack of focal point and clarity in terms of direction, the Granby quintet should have no problem taking the step to the next level and developing their promise into something special.

‘Honesty Is A Dying Breed’ by Life On The Sideline is is out now on Take This To Heart Records.

Life On The Sideline links: Facebook|Twitter|Bandcamp