Back in April last year, we launched a Patreon to maintain Already Heard‘s longevity. As a reward for supporting Already Heard, Patrons receive a handpicked release or compilation courtesy of our partnership with several independent labels from the UK, the US, Europe and Australia.

Originally founded in 1997, Lockjaw Records‘ history lies in releasing the best in DIY punk and hardcore from throughout the UK and Europe. Now with outposts in Guildford, London, Manchester, Oostkamp and Antwerp, Lockjaw Records is proud to be part of a thriving international music community, built on friendship, social-responsibility and a mutual love of punk rock.

Based across Germany and France, over the past four years, KROD Records has maintained a growing reputation for releasing stellar and emerging punk bands from across the continent. Their back catalogue includes releases from Cold Reading, Colour Me Wednesday, Prey Drive, The Deadnotes and South Berkeley. 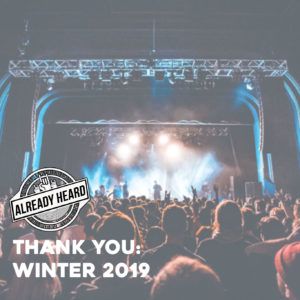 The fourth volume of our ongoing ‘Thank You’ compilation series is now available to all Patreon supporters.

If you enjoy the content Already Heard produces, you can support us on Patreon from $1 a month. By becoming a supporter of Already Heard on Patreon, you will help support the day-to-day running of the site.

‘The AH Collective’ is a standalone playlist consisting of songs chosen by the AH team of writers and photographers.

However, there is a reason we’ve called it ‘The AH Collective’. We want to show our readers there’s no divide between us (the AH team) and them. So, we’re offering all Patreon supporters the chance to contribute to the playlist.

If you have a song or band that you’d like to see on the playlist, you can submit to be included when you become an Already Heard Patreon supporter.

For £2/$2.62 a month you will receive a handpicked release or compilation courtesy of our partnership with several independent labels from the UK, the US and Australia:

You will digitally receive a compilation every two months, with a release from one of the above labels in the intervening months.

Thank you to the following people for supporting us on Patreon.